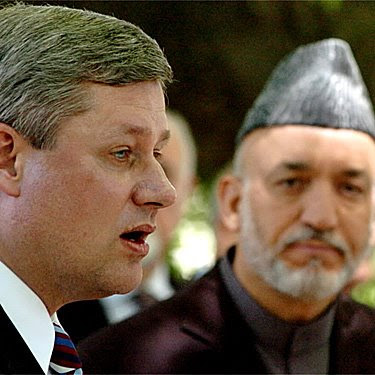 Funny what it takes to get us to sit up and notice, to tweak our collective conscience. We had one of those moments this week when an uproar of indignation arose over Afghan legislation said to sanction forced sex within marrriage. The idea that the Kabul government had the temerity to pass laws that obliged women to - well, oblige - their menfolks' carnal demands was too much for Western societies already a bit cranky from war-weariness.

Under scrutiny for having screwed up the global economy, our politicians positively jumped at the chance to heap a dose of righteous indignation on Hamid Karzai and his legislators. One by one, the leaders of NATO nations denounced the measures. Even Harper got into the act although I've always thought that fundamentalists of all stripes very quietly believe something along those same lines.

According to The Guardian, Britain's beleaguered PM, Gordo Brown, didn't hesitate to put the boots to Karzai:

"I phoned the president immediately about this because anybody who looks at Afghanistan will be worried if we are going to see laws brought in that discriminate against women and put women at risk," Brown said.

"I made it absolutely clear to the president that we could not tolerate that situation. You cannot have British troops fighting, and in some cases dying, to save a democracy where that democracy is infringing human rights.

"[Karzai] responded by saying this law would not be enacted in the way it has been presented."

Okay, so he's going to scrap the law 'in the way it has been presented.' What does that mean?

I don't see how revising this law is really going to change much on the ground for Afghan women and girls. The offending statute appears to be nothing more than a formal measure to decriminalize conduct that's already pretty widely tolerated. We seem to be acting as though it was going to oppress Afghan women. That's nonsense, they're already oppressed.

Western grandstanding doesn't obscure the plain fact that we really know just how bad things are and will remain for Afghan women. The Guardian article noted this:

Fears have also been raised about the safety of the female parliamentarians who have spoken out on the issue. Foreign ambassadors met in Kabul today to consider a request to pay for bodyguards to protect them.

Protect them from whom? Here's a hint - they're not talking about the Taliban.
Posted by The Mound of Sound at 9:56 AM

That is the biggest bull yet from Harper and the ilk. Scrap this law and “mission accomplished”. It is like putting a little fluff over the poison – have a sip but you must not see it.