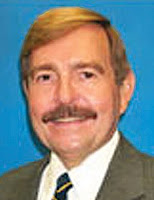 What's with homosexual homophobes? One of the founding fathers of the far right, uber-sanctimonious Family Research Council, George Rekers, was spotted returning from an overseas trip accompanied by a "rent boy." From Right Wing Watch:

On April 13, the "rent boy" (whom we'll call Lucien) arrived at Miami International Airport on Iberian Airlines Flight 6123, after a ten-day, fully subsidized trip to Europe. He was soon followed out of customs by an old man with an atavistic mustache and a desperate blond comb-over, pushing an overburdened baggage cart.

That man was George Alan Rekers, of North Miami — the callboy's client and, as it happens, one of America's most prominent anti-gay activists. Rekers, a Baptist minister who is a leading scholar for the Christian right, left the terminal with his gay escort, looking a bit discomfited when a picture of the two was snapped with a hot-pink digital camera.

Reached by New Times before a trip to Bermuda, Rekers said he learned Lucien was a prostitute only midway through their vacation. "I had surgery," Rekers said, "and I can't lift luggage. That's why I hired him." (Though medical problems didn't stop him from pushing the tottering baggage cart through MIA.)

...In 1983, [Rekers] and James Dobson, America's best-known homophobe, formed the Family Research Council, a D.C.-based, rabidly Christian, and vehemently anti-gay lobbying group that has become a standard-bearer of the nation's extreme right wing.

Well, at least the Vatican's not on the hook this time.
Posted by The Mound of Sound at 1:18 PM

When are people going to learn that this is going on all the time in North America. Men going overseas to fiddle-diddle children and, bringing these children back for a "vacation". The bigger the population becomes, the more this will happen. There is the religious connection.

I thought you might like to read this:
Canadian organized pedophile trips to Thailand: US
Wed May 5, 3:54 PM

NEW YORK (AFP) - A Canadian man pleaded guilty to organizing trips to his home in Thailand for men to have sex with young boys, US officials said Wednesday.


Wrenshall "admitted that from at least... January 2000, he arranged trips to his home during which US citizens and others paid him to engage in sexual acts with Thai boys," the statement read, citing court documents.


A federal grand jury in New Jersey indicted Wrenshall, a Canadian citizen, in August 2008 after officials learned that a New Jersey resident had traveled to Wrenshall's home "to engage in illegal sexual acts with minor boys."


British police arrested Wrenshall at London's Heathrow Airport in December 2008 and extradited him to the United States in July 2009.


Three of Wrenshall's US clients have already pleaded guilty and have been sentenced on sex tourism and related charges, the statement read.


One of Wrenshall's clients was identified and arrested in May 2008 just 48 hours after Interpol released a sanitized picture of a man sexually abusing Thai boys. It was the second time Interpol has made a public appeal to identify an alleged child abuser, the statement read.

According to Canadian law, this man can be extradited to Canada and face charges here.