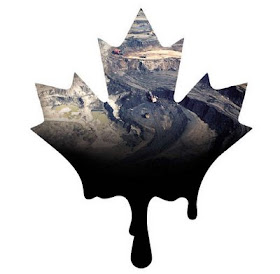 Two trillion dollars. I'm guessing that, even for you, that's a lot of money.

It's the estimated liability of Alberta's five largest energy producers according to the Parkland Institute, a think tank at the University of Alberta.


"The Big Five need to start publicly disclosing their emissions modelling for the sake of transparency and accountability," reads the report, released Wednesday by the Parkland Institute, an Alberta public policy research network based at the University of Alberta.

It says Canadian Natural Resources Limited (CNRL), Suncor Energy, Cenovus Energy, Imperial Oil and Husky Energy have not fully disclosed how much carbon pollution they expect to create out of their own assets. This pollution now has a hefty price tag since governments around the world have committed under the 2015 Paris Agreement to slash greenhouse gases in order to prevent dangerous changes to the climate.

“Governments can’t properly regulate corporations when they don’t have all the facts at hand,” the report’s co-author, Ian Hussey, said in an interview.

“Those are disclosures that we’re not seeing yet, but we believe these companies are already making these calculations.”

The report says the carbon liabilities — that is, the social cost of the carbon pollution that will come from developing their fossil fuel reserves — of the “big five” firms, based on a conservative estimate of $50 per tonne, is $320 billion, outweighing the whole of Alberta’s GDP, which it pegs at $309 billion.

In a scenario where polluters were paying $200 per tonne of carbon emissions, that liability would add up to $1.99 trillion based on their proven and probable reserves of oil and gas, according to the study.

Once again we're left to grapple with spotty accounting from the Oil Patch where environmental costs are frequently treated as "externalities" that are kept off the books, allowing the economic case for the Tar Sands to appear viable.

The oil wars that pit Victoria against Edmonton and Ottawa are heating up. The crud that Alberta and the feds insist on pumping/leaking across British Columbia and our coast is just that, crud. It's full of heavy metals, acids, carcinogens and other toxins that are incredibly persistent and damaging. The Americans gave us a free demonstration of that from the Enbridge spill in Kalamazoo, Michigan. Yet Rachel and Justin and all their subordinate sphincters think pumping that same lethal crud across British Columbia's mountainous and seismically active territory is just dandy.

And when - not 'if' but when - one of those tankers runs up on the rocks and pours a planetary gutload of that crud into our coastal waters, the Trudeau government has approved the use of Corexit as an oil spill "dispersent."  Corexit doesn't disperse anything. It buries the evidence, sending it to the seabed, out of sight/out of mind, where, in the case of a product as noxious and persistent as Tar Sands dilbit, it can contaminate the marine ecology for decades, generations. The Americans have given us another demonstration of that. Corexit was used with disastrous consequences in the Exxon Valdez spill in Prince William Sound, Alaska, which, decades later is still not cleaned up, and to bury the evidence from the Deepwater Horizon disaster in the Gulf of Mexico. Thanks, Justin, for adding insult to injury or, perhaps, disaster to injury.

The BC government's latest, unpatriotic impertinence has been to restrict the amount of dilbit that can be transported across our province until "the behaviour of spilled bitumen can be better understood."

Now you would have thought, with so much at stake, that the feds and their counterparts in Alberta and Saskatchewan, and the big energy producers would have long ago tested how dilbit behaves when spilled into both fresh and salt water. Oh wait, the freshwater testing has already been done in Kalamazoo. That's not good. But there's still the critical saltwater testing. We haven't seen anything on that although when the government resorts to approving Corexit that's an indication that they have probably run their tests and don't want to talk about it. Besides they - the feds, Alberta and the Tar Sanders - would much prefer to offload that risk on the people of coastal British Columbia.

Rachel managed to drop a shitload of righteous indignation on British Columbia for its audacity.

“Having run out of tools in the toolbox, the Government of British Columbia is now grasping at straws,” said Alberta Premier Rachel Notley in a statement. “The B.C. government has every right to consult on whatever it pleases with its citizens. It does not have the right to rewrite our Constitution and assume powers for itself that it does not have. If it did, our Confederation would be meaningless. Therefore, the action announced today by the B.C. government can only be seen for what it is: political game-playing.”

Of course there's one thing Notley, like her Conservative predecessors, does not want to discuss - why they think it's okay to ship that crud in the first place. Why not refine it on site? Why not keep those heavy metals, acids, carcinogens and myriad toxins right where they found them, in Athabasca?  At least minimize the environmental risks to British Columbia. Build a refinery or three, hire a bunch of Canadians to work the plants and ship full refined synthetic crude oil. There's a plan.

It's a plan but it costs money. And the Tar Sands can only pretend to be economically viable if actual costs are minimized, buried, or offloaded on someone else, free of charge.

So, Rachel, up yours. All the way up.