And This is Why I Despise the Liberals 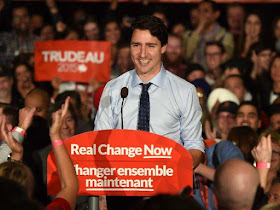 The first line in the Globe article sums it up:

Canada's transition to a low-carbon future must include new pipelines to expand oil exports to a diverse global marketplace, federal and Alberta ministers told an energy conference in Winnipeg on Thursday.

Now, if you're a drylander who can't understand the internal contradiction in that, allow me to explain. What they're saying is that our 'low-carbon future' hinges on getting "new pipelines" to expand the export of the world's most toxic, high-carbon, ersatz petroleum. So our low-carbon tomorrow depends on our high-carbon today and for the next half century. Don't worry about the low-carbon part. We'll get around to that in, well, somewhere around 2065, maybe?

And if you think Trump's a damned liar, let's remember these assurances of a bright, clean future are coming from federal and Alberta bitumen pimps. They have no reason to lie, do they? Dirty bitumen/clean future that makes a lot of sense, doesn't it?  Well they are pimps and they are liars and, no, paving the clean future with what actually is best used for paving dirt roads doesn't make any sense at all, none.

Best of all, not one of these pimps will explain why the stuff that makes bitumen so dangerous, even deadly, and so persistent, won't be refined out, on site, in Alberta. Why not refine the crud there? Why not refine out the heavy metals, the carcinogens, the acids, the abrasives and the sludge in Alberta? Justify not doing that.

Why, for the sake of not having to refine this vile, toxic product in Alberta, should Ottawa and Alberta expect to offload the resulting hazards and probability of catastrophe on British Columbia and, especially, the people of the coast, especially our First Nations?

If, as we're constantly told by Alberta and Ottawa, they have a right to move this product to "tidewater" then they have an obligation to do it right, to minimize risks that could easily be sharply reduced through refining bitumen on site. That's their minimum obligation to us, the people at risk from these offloaded hazards.

Why are we to be exposed to this? For one reason and one reason only. They don't want to pick up the tab for refining this hazmat crud in Alberta. It's better for their bottom line if they can treat those hazards as "externalities." That's a term economists use for costs they can keep off the books, usually by dumping them on someone else, in this case us.

This is a scam, a betrayal of British Columbia by Ottawa and Trudeau is not one bit better than Harper on this one. If anything, Trudeau is a damn sight worse than Harper. It was Trudeau who scammed British Columbians out of their votes in 2015 with his promises of cleaning up the corrupt National Energy Board, full and proper environmental assessments, full consultations with First Nations and, of course, the business about "social licence." That mop-headed scumbag was lying through his teeth and he wasted no time breaking every one of those solemn promises. That's real Trump-grade shit.
The Mound of Sound at 10:56 AM
Share