When Professor Walt Looks at Trump He Sees - ?

Trump is frequently compared to former Italian Prime Minister Silvio Berlusconi, another glib, unscrupulous, lying, preening sexual predator who managed to keep getting elected even though his personal conduct was deplorable and his policies were a disaster. Strutting and corrupt popinjays like Benito Mussolini, Carlos Menem, and Jean-Bédel Bokassa of the Central African Republic come to mind as well, along with other dictators who constructed cults of personality about themselves and treated their countries as a personal possession.

Well, if not Silvio, them whom? What, Willie, Kaiser Bill? 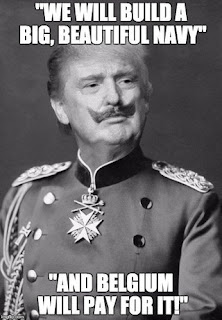 I’ve been struck by the parallels between POTUS 45 and the last Hohenzollern emperor: Kaiser Wilhelm II. I’m not the first person to notice the similarities — Doug Bandow of the Cato Institute wrote a nice piece on this topic back in January — but the common features go beyond their individual characteristics. Not only do Trump and the kaiser share some unfortunate personality traits, but there are also striking similarities between conditions in Wilhelmine Germany and the situation in the United States today. There are also some important differences, but they are not entirely reassuring.

Consider first the personalities of these two leaders. Wilhelm II was by all accounts a pretty smart guy, but he frequently acted like a spoiled teenager and was prone to rash and bellicose remarks that undermined Germany’s image and international position. In a notorious 1908 interview with the London Daily Telegraph, for example, he declared, “You English are mad, mad, mad, as March hares.” One wonders what he would have said on Twitter. Wilhelm also had little patience for domestic opposition, saying, “I regard every Social Democrat as an enemy of the Empire and Fatherland.” Not to be outdone, Trump has called the U.S. media the “enemy of the American people.”

Historian Thomas Nipperdey once described Wilhelm as “superficial, hasty, restless, unable to relax, without any deeper level of seriousness, without any desire for hard work or drive to see things through to the end, without any sense of sobriety, for balance and boundaries, or even for reality and real problems, uncontrollable and scarcely capable of learning from experience, desperate for applause and success — as Bismarck said early on in his life, he wanted every day to be his birthday.”

Okay, fair enough. But what about pre-war Germany and today's pre-war America?

For starters, both countries exhibit the familiar warning signs of excessive military influence. In Germany, the Army was essentially “a state within the state,” and scholars such as Craig, Gerhard Ritter, Fritz Fischer, and Jack Snyder have all documented how military dominance distorted German thinking about its security and led to an overreliance on military power and an overly confrontational foreign policy. The German military used domestic organizations like the Navy League and the writings of co-opted academics to make its case to the German people; in America, the Pentagon runs its own public relations operations and weapons manufacturers give generously to think tanks that favor increased defense spending.

Moreover, Germany under Wilhelm abandoned Bismarck’s sophisticated reliance on diplomacy and subordinated that function to the dictates of the General Staff.
...

Berlin consistently exaggerated the actual dangers it faced, especially when one remembers that it eventually took on France, Russia, and Great Britain (and later the United States) and nearly won. Even worse, Germany repeatedly acted in ways that solidified the alliance that opposed them, instead of working assiduously to undermine it. When exaggerated German fears about a hypothetical future decline led its leaders to launch a preventive war in 1914, they were (as Bismarck might have put it), “committing suicide for fear of death.”

One sees a similar pattern in the United States today, where threat-inflation is endemic, the utility of force is exaggerated, and the role of diplomacy is neglected or denigrated. Professional militaries have powerful tendencies to inflate threats, because worrying about remote dangers is part of their job and doing so helps justify a bigger budget. As Britain’s Lord Salisbury observed more than a century ago, “if you believe the doctors, nothing is wholesome; if you believe the theologians, nothing is innocent; if you believe the soldiers, nothing is safe.” They are also prone to think that force can solve a multitude of problems, when it is in fact a crude instrument that always produces unintended consequences.

Consistent with this pattern, the United States routinely views third-rate powers like Serbia, Iraq, Iran, and others as if they were mortal dangers, treats problems like the Islamic State as if they were existential threats, and tends to assume these difficulties can be solved by blowing more stuff up or sending in another team of special forces. The results of these efforts have been mostly disappointing, yet hardly anyone in Washington is willing to question this approach or even ask our commanders why “the world’s best military” isn’t winning more often.

Wilhelmine Germany and Trumpian America share another trait: an inability to get their finances in order.Germany was Europe’s most dynamic economy before World War I: It had overtaken Great Britain as an industrial power and was leaving France far behind. It also boasted outstanding universities and a world-class scientific establishment. Yet the German state was chronically starved for funds, even as it tried to maintain Europe’s most powerful army, build an expensive modern navy, and pay for social programs that were quite generous by the standards of the time.

And why was Germany in this pickle? Because neither wealthy Junker landowners nor rich German industrialists wanted to pay taxes, and both groups had the political influence to stop the government from raising them.

Germany’s ruling elite understood Wilhelm’s deficiencies and did a good job of keeping him away from the actual levers of power. During the July Crisis that led to World War I, in fact, Wilhelm was staying at a palace outside Berlin and was for the most part out of the loop, in good part because Chancellor Theobald Bethmann-Hollweg knew the kaiser was a loose cannon and didn’t want him screwing up the chancellor’s own plans to exploit the crisis. Wilhelm scribbled lots of bellicose marginalia on diplomatic messages and conjured up various scenarios for resolving the crisis, but nobody paid much attention either to his rants or to his more sensible suggestions (such as the stillborn “Halt in Belgrade” proposal). Ironically, Wilhelm II bore little direct responsibility for the war, whatever his personal defects may have been.

By contrast, Trump is still in charge of the executive branch, and for the most part it is doing his bidding. The “adults in the room” (James Mattis, H.R. McMaster, John Kelly, etc.) may have been able to temper some of Trump’s worst instincts, but he’s still managed to withdraw from the Trans-Pacific Partnership, alarm key allies, cause a precipitous drop in global confidence in the United States, undermine the Iran deal, fuel escalating tensions on the Arabian Peninsula, and repeatedly pour gasoline on the delicate situation with North Korea. Because top officials are still listening to him and still following his orders, Trump’s personality defects are more worrisome and consequential than Wilhelm’s were.

The Founding Fathers created a divided government because they understood deeply flawed people sometimes get elected, and they did not want the country to be overly vulnerable to one person’s flaws or ambitions. They also created mechanisms to remove such a leader when circumstances warrant. I hope it does not come to that, but for now I’ll take some comfort that such mechanisms exist. 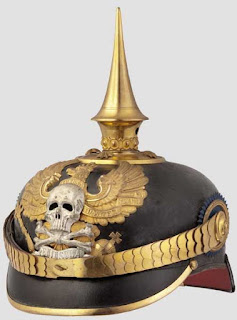