Even the National Review Thinks Trump is Nuts. 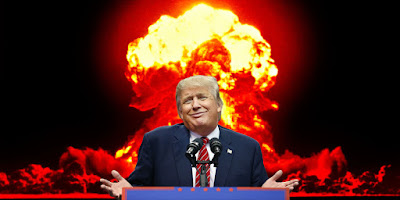 There are few more reliable Republican magazines than the National Review. Which is why it was refreshing to read NR columnist, Michael Doherty's take on the Mango Mussolini's antics in Iraq.


...since the news of this assassination broke, the president has sounded out of his mind.

This disgusting threat is in many ways worse than his promises of “fire and fury” in North Korea. The punishment would fall not on the government, or on the military that tortures and maims, but on the whole Iranian people — and really all of humanity that has an interest in the preservation of great treasures of antiquity, of which there are many in Iran. These are jewels of ancient civilization that ought to outlast Iran’s current government, and that deserve a better custodian than the mullahs. That aside, the threat carries zero strategic value for us while offering infinite propaganda value for the Iranian regime.

Trump wasn’t done. “These Media Posts will serve as notification to the United States Congress that should Iran strike any U.S. person or target, the United States will quickly & fully strike back, & perhaps in a disproportionate manner,” the president tweeted. In this, he reveals he has heard about language of proportionality but doesn’t understand its place in just-war theory. Proportionality is not about returning an equal or ever-so-slightly more forceful slap to someone who slapped you. Proportionality is about using the appropriate amount of force to achieve the desired end.

This unhinged rhetoric is not just dangerous in itself, it’s unproductive. NATO members put out statements supporting America’s decision to strike at Soleimani, statements that read as if a stage director had scrawled the word “cringe” in the margins. They are tempered precisely because the publics of our various European allies find Trump’s rhetoric crazy, and unlike Americans, they are not inclined to lower their standards of sanity to accommodate his. They may also remember that the last two expansions of American hostilities in the Middle East created the refugee crisis and a wave of terrorism headed their way.

'Disgusting, unhinged rhetoric'. Sure. Trump sounding 'out of his mind.' Why not? That's the sort of thing you might expect from the mainstream media, or leftist outfits like MSNBC. Only this is the National Review. It's true of course, all of it. Trump has mentally deteriorated over the past two years. He's become a genuine nutjob. Captain Queeg of the Oval Office.  Even the National Review can't ignore the path their president is taking America down.

Trump is a bully.
Need we say more?

He is not only a bully, he is not to be trusted--he abandoned the Kurds. it would be just like him to start a war with Iran, involve other countries and then walk away when he is told to by Erdogen or Putin, leaving the rest of NATO holding the bag.

Trump is a liar. they have counted, he's lied more than 14K times and Pelosi and others can't get a straight answer on why Suleimani was murdered. the Pompei line of imminent dangers, really--not an e.g. yet. So it might be trump lied again. he just needed something to deflect from the impeachment proceedings and the continued release of documents concerning subjects covered in the Mueller report. 302s have been released and they make one wonder, will Pelosi have more grounds to impeach Trump. Empty wheel has some interesting posts up about all of that. iN MY opinion there were no impending emergenices which required murder. Just Trump and his family's asses in slings regarding their past activities. One of the posts on Empty Wheel Why Corsi lied to protect Kushner. Just from the title, you can conclude things are not over. The General is not getting a pass on his actions. The prosecutor is suggesting sentencing ought to be at the upper end. If Trump doesn't come up with a pardon, what will he do. Bolton says he'll testify at the Senate hearings. yes, Trump really does need a war to distract the public. Then if Bolton's book says as much as it might, trump will need a second war to deal with that.
We might all be better off if we take a nap while Trump has his tantrum and ignore him.