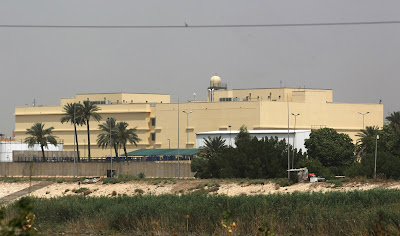 The sprawling US embassy compound in Baghdad's Green Zone has been hit before. What makes today's attack different is that one of the three rockets hit the embassy cafeteria at dinner time.

Three rockets slammed into the US embassy in Iraq's capital on Sunday in the first direct hit reported after months of close calls, as thousands kept up anti-government sit-ins across the country.

The attack marked a dangerous escalation in the spree of rocket attacks in recent months that have targeted the embassy or Iraqi military bases where American troops are deployed.

None of the attacks has been claimed but Washington has repeatedly blamed Iran-backed military factions in Iraq.

On Sunday, one rocket hit an embassy cafeteria at dinner time while two others landed nearby, a security source said.

The return of Muqtada.

Shia cleric, Muqtada-al-Sadr, has been rallying thousands of supporters to demand a complete ouster of American troops from Iraq.  He has also supported anti-government protests that have resulted in the deaths of some 600 protesters at government hands since October. In 2004 his Mahdi army (now rebranded the "Peace Companies") played hell with American occupation forces in Baghdad and Najaf. He was, for a time, wanted by American authorities for murder.

Today, even some of Sadr's former adversaries, American and Iraqi, see the firebrand as Iraq's last best chance for restoring peace.

Will Trump strike back?

American authorities claim no casualties were sustained from the direct missile strike on their embassy cafeteria at dinner time but the Americans have a track record of saying whatever suits them.