Living In an Anti-Vax World 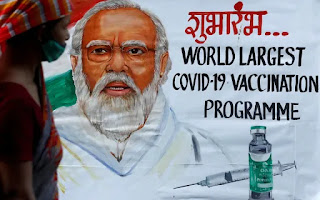 Let's say you're a salesman in a car dealership. You walk over to a prospective customer who points to a car and asks, "what about this one?"

You give it a second and then say, "well, it's better than nothing."

That sounds to me like the pitch we're getting for the Oxford Astrazenica vaccine. Astrazenica has been plagued with reports that it can cause clotting. Several countries have put this vaccine on hold. Others have decided it can be used except for those 65 and over.

The World Health Organization, Health Canada and other authorities have pushed back with a tepid claim that it's safe enough, better than nothing. Yes some Astrazenica patients have developed clotting but the numbers are low, statistically irrelevant. Yet no one seems willing to come out and say "it's safe." Why not?

Canada's supply of this vaccine is being produced in India. That surprised me. With a population somewhere in the range of 1.36 billion I imagined they would be using everything they could produce to vaccinate their own people. Then I read that India isn't doing too well vaccinating the Indian population. Two problems. One is the difficulty in reaching people in remote villages in the countryside. India has  a shortage of nurses and healthcare workers needed to vaccinate such a large population. The other cause is that there are a lot of Indians who don't want the vaccine. They're hesitant, unsure whether it's effective or really safe. If those who want it can't get it and those who need it don't want it, you're in trouble.  From The Telegraph:

Reluctance to take vaccines is jeopardising the world's biggest Covid jabs campaign with even health workers in India apparently wary of receiving shots.

Barely half of Indian doctors and nurses are showing up to vaccine appointments, prompting forecasts that the world's second most populous nation is dramatically behind vaccination targets.
If doctors and nurses doubt the efficacy and safety of this vaccine, we're going to have a problem with our homegrown conspiracy theorist/anti-vaxxers. They're the sort of people who will walk straight out of the showroom when you say your product is better than nothing. We need more than a wobbly, "sure, okay" from our health authorities. They have to do better.
Posted by The Mound of Sound at 11:29 AM