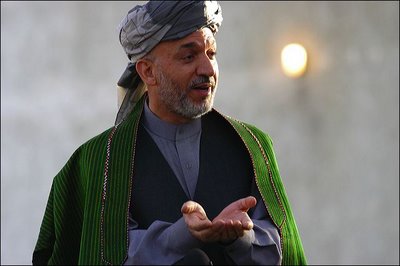 Hamid Karzai is a curious fellow. Resplendent in his elegant robes and armed with an engaging and sophisticated manner, he is Washington's handpicked guy who became President of troubled Afghanistan albeit not without a lot of American influence. Mr. Karzai's job has never been easy. He may have taken on one of the most challenging presidencies in the history of democracy. Unfortunately, the job may be too much for him.

Shortly after the 11 September, 2001 atrocities, the United States helped in toppling the existing Taliban government. Washington chose, perhaps understandably, to depict this as a great American feat of arms but the victory was really very little to boast about. The Taliban and the rebel, Northern Alliance had been at each others' throats for years. They had fought to the point of exhaustion with each side content to dig trenches and fire a few volleys of artillery at each other in a very static war. Rolling up the Taliban was, in these circumstances, pushing on an open door. So rapidly did the Taliban collapse that Washington tried, albeit unsuccessfully, to slow the rebel advance on Kabul and Kandahar. In the wake of all the confusion and disarray the Taliban crept away to the traditional heartland of Afghan insurgency, the border region adjoining Pakistan.

The U.S., however, lost sight of the goal of destroying al-Qaeda. It had the terrorist mob in disarray and their leaders, including bin Laden, run to ground in the mountains of Tora Bora. But the White House lost sight of the real target and turned its attention instead on Baghdad and the rest is history. The Taliban retreated, regrouped, rearmed and returned to the fight, currently being waged against various NATO forces including Canada. al-Qaeda, by contrast, was even more flexible. It responded with disturbing efficiency to the situation and morphed itself into a much more decentralized organization spread out even more widely throughout the world. It no longer depends on central command. Some even believe bin Laden is in a form of semi-retirement, no longer at the helm.

By turning its attention and resources toward Iraq, America undercut their man Karzai. For some time he was derisively called the Mayor of Kabul, mocking his lack of authority beyond the capital city limits. In the provinces, control was held by the warlords in conjunction with the drug lords and, increasingly, by a resurgent Taliban. All of these forces combined to render Karzai's administration largely impotent. President Karzai had no choice but to cede powers to some pretty nasty types from the warlords and criminal ranks.

The dream of a secure, secular and democratic Afghanistan was shattered with the loss of American resolve. Karzai's government came to be beholden to the warlords and drug lords as his situation became more untenable. The justice system, indeed much of the national government, came to be seen as corrupt. The opium trade, suppressed rather ruthlessly by the previous Taliban government, flourished again. Afghanistan remains a failed state, only with different management.

One more or less dodgy election does not a democracy make and that holds true certainly for Afghanistan. Even if we could wipe out the Taliban, disarm the warlords and send the drug barons scurrying for cover, Karzai needs to hold up his end or there's really nothing left worth saving.
Posted by The Mound of Sound at 6:39 PM