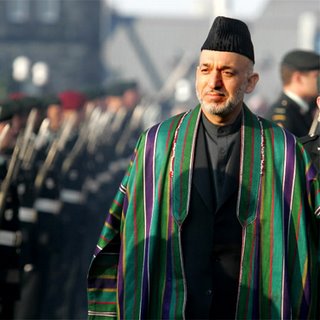 Have you noticed that the Afghan president, Hamid Karzai, is still here in North America? He's popped up at the United Nations, then in our House of Commons and, most recently, he's back in Washington. I don't think he wants to leave but, then again, would you? Here's a guy whose country appears to be in meltdown. Five years after the Taliban government was toppled he's still in control of almost none of his own country.

The Taliban have returned in their southern Pashtun regions. His army is beset with desertions. His cops and regional officials have established a hard-earned reputation for brutality and corruption. Those parts of the country not experiencing insurgency rest firmly in control of warlords and their militia who seem reluctant to send any tax revenues back to Karzai in Kabul. Opium production is soaring to record levels. The country's key source of income is foreign aid. Sharia law is back in force even in liberated regions. If you were running that show, would you want to go home? Home to what?

In America, the McClatchy newspaper chain operates a first-rate international news organization. When it comes to war reporting it features Joe Galloway who, if you've never heard of him, is today's equivalent is Ernie Pyle of WWII.

"Afghanistan has become Iraq on a slow burn. Five years after they were ousted, the Taliban are back in force, their ranks renewed by a new generation of diehards. Violence, opium trafficking, ethnic tensions, official corruption and political anarchy are all worse than they've been at any time since the U.S.-led intervention in 2001.

"By failing to stop Taliban leaders and Osama bin Laden from escaping into Pakistan, then diverting troops and resources to Iraq before finishing the job in Afghanistan, the Bush administration left the door open to a Taliban comeback. Compounding the problem, reconstruction efforts have been slow and limited, and the U.S. and NATO didn't anticipate the extent and ferocity of the Taliban resurgence or the alliances the insurgents have formed with other Islamic extremists and with the world's leading opium traffickers.

"There are only 42,000 U.S. and NATO-led troops to secure a country that's half again the size of Iraq, where 150,000 U.S.-led coalition troops are deployed. Suicide bombings have soared from two in all of 2002 to about one every five days. Civilian casualties are mounting. President Hamid Karzai and his U.S. backers have become hugely unpopular.

"'The Americans made promises that they haven't carried out, like bringing security, rebuilding the country and eradicating poverty,' said Nasir Ahmad, 32, as he hawked secondhand clothes in the clamor of bus engines, horns and barking merchants in Kabul's main bazaar. 'Karzai is an irresponsible person. He is just a figurehead.'

"James Dobbins, who was President Bush's special envoy to Afghanistan, said that the administration dismissed European offers of a major peacekeeping force after the U.S. intervention and almost immediately began shifting military assets to invade Iraq.

"The White House "resisted the whole concept of peacekeeping," said Dobbins. "They wanted to demonstrate a different approach, one that would be much lower cost. So the decision to skimp on manpower and deploy one-fiftieth the troops as were deployed in Bosnia was accompanied by a decision to underplay economic assistance.

"'We invaded Afghanistan in October 2001. We conquered the country in December, and Congress was not asked to provide any (reconstruction) money until the following October,' he continued. 'Much of the money didn't show up for years. And not only were the actual sums relatively small, but with the failure to establish even a modicum of security in the countryside, there was no way to spend it.'"

As for the "hearts and minds" struggle, it too seems to be faltering:

"'Many of the people of Afghanistan are on the fence right now, and they will be for whichever side wins,' Marine Corps Gen. James Jones, NATO's top military commander, said on Sept. 20. 'If military action is not followed by visible, tangible, sizable and correctly focused reconstruction and development efforts, then we will be in Afghanistan for a much longer period of time than we need to be.'

"For that approach to succeed, there has to be security. Yet there are too few U.S. and NATO troops to secure the vast tracts of desert and mountains in eastern and southern Afghanistan, where the Taliban find their greatest support.

"There are 22,000 U.S. troops in Afghanistan. But there are only 5,000 U.S. combat soldiers in eastern Afghanistan bordering Taliban refuges in Pakistan, a 27,000-square-mile area of vast deserts and mountains nearly the size of South Carolina.

"The insurgents and their leaders operate from Pakistan, aided by Pakistani officials, radical Islamic parties and al-Qaida. They're flush with recruits from Islamist seminaries on both sides of the border that offer religious instruction and combat training.

"Taliban extremists also have been to Iraq for training in combat and bomb-making, and Iraqi insurgents have traveled to Pakistan to forge closer ties with Afghan and Pakistani extremists, according to U.S. intelligence officials.

"The insurgents fight, then blend back into the population. They've forged alliances with powerful drug lords, sharing in the profits of opium production, which has increased by 59 percent this year to record levels, fueling immense official corruption.

"The United States has paid for poppy eradication, but farmers have gotten virtually no help to plant alternative crops. The Taliban have stepped in, providing seeds and fertilizers for new poppy crops in return for support and recruits. "

Does this all seem to be running around in circles and going nowhere? Well, it is. The two key intervenors in Afghanistan, NATO and the United States don't have the political will to win this thing. Our forces are vastly too small to hope to secure the countryside which eliminates the prospect of reconstruction much less reforming and stabilizing the Karzai government. All we can do is engage in firefights with the Taliban and drug lords and, even then, it's when and where they choose. Karzai's own people have had it with the guy. He was installed amidst promises of great things that just haven't happened.

In the West, our leaders' political capital is pretty much depleted. The two biggest players in the Global War Without End on Terror, Bush and Blair, have seen their popular support evaporate. Thanks to Rumsfeld they've been fighting a war 'on the cheap' and it has failed miserably as it was bound to fail. What are their chances now of going back to their people and saying, "Let's try this all over again, but with vastly more troops. Let's bring back conscription"? Five years down the road you can't pull that off. You and your government will get slung out in disgrace. 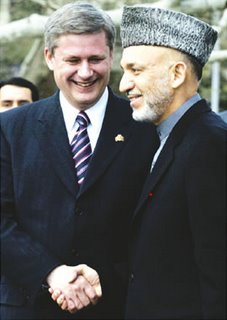 "We're Screwed"
"Bet'yer Ass but Keep Smiling"
This gives a brand new meaning to "stay the course." It no longer means to stick with it until we succeed. What it actually means is I don't want to admit my blunder and so I'll just keep this ticking over until my term is up and this all gets dumped into someone else's lap. Hey, it's only two more years.
Posted by The Mound of Sound at 8:13 AM