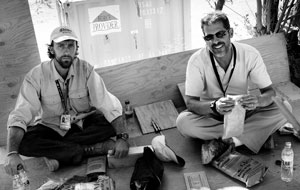 Jonathan Landy, right
A couple of days ago I had a chance to get some information about Afghanistan from Jonathan Landay, freshly back from that hellhole. Landay has been covering Afghanistan since 1985. How many people do you think could have even found the place on a map back then? The guy seems to know what he's talking about. He's not some lame 'embed' gushing with orgasmic patriotism and holding forth about this 'decisive victory' and that 'crushing defeat.'

Here are a few of Landay's observations about the real state of affairs in Afghanistan:

"Corruption is on an epidemic scale and many local officials are in cahoots with the Taliban. They play both sides of the fence waiting to see which one wins. I dont know how Panjwai began, but the idea that the Taliban were defeated there is nonsense. They did suffer serious losses, but they also knew when to melt away. Classic guerilla tactics. Based on daily Air Force reports, it looks like they have began to resurface further north and east, in Zabul and Ghazni provinces.

"The insurgents are not fighting out of fixed, fortified positions. They set up in dense orchards and vineyards. Because the country is so parched, farmers dig extremely deep irrigation ditches. These make extremely good slit trenches. They span the entire region. So do ravines, wadis and caves. Guerillas could not ask for better terrain. They dont need to build fortified positions. So the B1Bs, F-16s, F-18s and the like have to keep bombing the same places, over and over and over. That creates more civilian casualties as well, fueling the insurgency. If you read my story, it says that there were no more than 3,000 US troops deployed in the Taliban's southern heartland until ISAF took it over Aug 1. We're talking 77,000 square miles. And 2,000 of those US personnel were assigned as support staff at Kandahar Air Base. They were not groundpounders. Even now, there are only 8,000 NATO-led combat forces in the sector. This and Pakistan's support are major reasons for the resurgence."

Landay was asked to comment on the changes he witnessed on his latest visit:

"I was most surprised by three things. The first was the extent to which anti-American sentiment had spread in the year since I last visited. At no time since I first visited Kabul in 1987 have I ever felt disdain by ordinary Afghans . . . until this trip. Almost every Afghan I spoke with, from intellectuals to Kabul University students to farmers said much the same thing: the United States had not only failed to make good on its promises of aid and security, but it is actually intent on remaining in Afghanistan as part of a war against Islam. There was enormous sympathy for the Palestinians and Hamas, Lebanese Hezbollah and Iran, and anger over Abu Ghraib, Guantanamo and U.S. policy toward Iraq. The second surprise was the extent to which the insurgency had spread over the past year. Last year, most of the fighting was confined to the Taliban's remote mountain sanctuaries because U.S. troops were taking the fight to them. The rebels avoided set-piece battles because they kept losing and operated in small bands. But this year, some of the worst fighting has been taking place around the main highway, some 30 miles east of the second largest city of Kandahar. And the rebels have been operating in large combat formations _ thanks to lessons learned from al Qaida and Iraqi insurgents _ with a ferocity that has surprised US and ISAF generals and exhausted their troops. The third major surprise was the main highway between Kabul and Kandahar, rebuilt with millions of US dollars, has become too unsafe for foreigners to drive in the past year."

That's about as unvarnished as you can get it.
'
Posted by The Mound of Sound at 6:43 PM

Unvarnished and tragic. Do you actually know Landay? It's this kind of truth that we need to get out and get to our government, (and the opposition).

I can't remember if it was the Globe or the Toronto Star, that recounted some of our soldiers questions about this mission, but they were quite telling.

I'll take a Landay type of account over a "Blatchford, love the cause in spite of everything" account anyday.

I've never met Landay but I had a chance to ask him about his recent visit to Afghanistan. I was particularly concerned about the levels of corruption among local officials and whether that was fueling uprisings among the people, independent of the Taliban insurgency. There have been reports that this is what happened at Panjwai. If that's true, we were naively killing the locals on behalf of corrupt and oppressive officials.