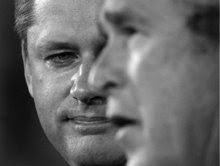 Okay, we've got the script. No climate deal at the G8 summit. In fact, no deal at all until and unless India and China capitulate to our terms. We'll cut 20% or 30% but they have to cut 20% or 30% or whatever it takes to match us.

Sounds fair, doesn't it? Sure, as long as you don't let facts get in the way. If you leave reality aside (and George w. & his Boy Clone of the North wouldn't have it any other way) then it makes perfect sense. It's when you add reality to the BUSHarper mix that it all turns really crunchy.

Sure China has just surpassed the United States as the world's largest emitter of greenhouse gases. China's population is also about four times greater than that of the U.S. That means, man for man, the average Chinese citizen is four times smaller - carbon footprint-wise - than his American counterpart.

So you're being told by a guy who is producing four times as much greenhouse gas as you that you're all going to have to make the same cuts. Even if you did that, the white boy's emissions would still be quadruple the Chinese guy's - in perpetuity to boot. White, yellow - sounds a tad racist, doesn't it? You might not think so but I'll bet you sure would if you were the Chinese guy.

Here's the other little slice of reality. China has just surpassed the United States in overall GHG emissions, only just. It's been the industrialized West that has contributed most to the problem we have today. It's our accumulated greenhouse gas emissions that we're now dealing with and we'll be dealing with that for decades to come. We had a couple of very dandy centuries out of it during which we Euros became insanely wealthy and powerful and exercised dominion over just about any place we found worth the bother.

This isn't lost on the Chinese guy or the Indian guy either. They know that the retreat of the Himalayan glaciers which threatens their key river systems that irrigate their agricultural heartlands that are essential to sustaining a population of more than a billion of their countrymen wasn't their doing. They've already put that one on our tab.

One more little point. China has become the leading GHG emitter by virtue of Western companies shifting their industrial production to China in pursuit of the low wage labour force. China is now making the goods for us that we would otherwise be making ourselves with the associated greenhouse gas emission problems. It's our consumption that's driving China's emissions as much as China's production. I wonder what China's GHG emissions would be if it was only based on domestic consumption?

We're not just outsourcing jobs. We're also outsourcing greenhouse gas emissions. Same thing with the Athabasca Tar Sands. We get the fallout, the U.S. gets the oil.

In any case, the Chinese, Indians and the Third World for that matter kind of feel like they're owed something by us. What? Hard to put a finger on it but maybe they would settle for Western leadership grounded in realism.

It's a global problem. That's why it's called Global Warming. The only way we'll ever deal with it is through global solutions. Now you won't get the consensus necessary for effective global solutions without rethinking our relationship to the world and each other.

Take our planet's atmosphere, the place where much of the global warming stuff happens. Whose atmosphere is it, no one's or everyone's? If you say it's nobody's then everybody's free to dump as much crud into it as they see fit because no one has any right to complain. That's a key element to the BUSHarper approach.

If, however, you decide it's everyone's, that puts it in a whole new perspective. I then hold an undivided, one-six and a half-billionth share in it, and so do you. That would mean that the United States and Canada, together, would hold about a one-twelfth interest in it. Add Europe into the mix and we might get slightly better than a one-fifth share in the atmosphere. Oh dear, wouldn't that set the cat among the pigeons.

There's so much room for argument - and deadlock - when these realities come up. What if the Chinese offered to cap their per capita greenhouse gas emissions at just one-half of the North American footprint? That'd be pretty hard to argue with, wouldn't it? They could easily do that today, go on about their business, and tell us to get back to them when we begin to reach that balance. That would make us look pretty damned stupid, wouldn't it?

Washington still insists on dictating the terms of any global climate change treaty and it wants those terms to reflect its own interests first and foremost, not the planet's. America can hold out - for now - but it won't be able to dominate the agenda forever. In its quest for excess (imagine waging an enormously expensive war without end on money borrowed from abroad) it has lost both prestige and influence.

If America won't accept terms that will bring the Chinese and Indians willingly onside there probably won't be a climate deal until the U.S. declines a lot further. Eventually there'll be an equilibrium under which commonality of interests will prevail. The question is whether we'll get there in time.
Posted by The Mound of Sound at 10:19 AM

MOS...everything you have said in this blog is absolutly correct. The Americans know it is big western companies that have done more than their share to contibuting to the pollution problems in China. I wonder what would happen if the Chinese demanded payment now, for the money they have loaned to the U.S. which most Americans know nothing about. Is it possilbe the Chinese might do that if the US doesn't keep its mouth shut? Maybe that would be a very good reason to attack China. Unless a person has lived in China, you would not know just how much the Chinese and Indians.....India...just for those who might think I am refering to North American native peoples...hate each other and that is NO JOKE. What a mess that would be with the US in the middle. A. Morris

You have just posted an editorial as to why Harper will not sign on to any deal without the major producers of GHG's, and, why it would be irresponsible of Dion to experiment with a tax that should it be implimented he has no idea of its effect. Anyone that thinks that after Obama is elected the US will change its stance regarding GHG emissions is dreaming. Obama's first job as President is to protect the US in regards to safety and welfare..handcuffing manufacturers and trade with emission controls while the very people they compete with spew out ton after ton will not happen on Obama's watch. First he's got a war to withdraw from..that will take most of his 8 years. Second, he's got a broken economy to adjust, that will take him 4 years. He will probably end up brokering a deal for 2030 with China, there will be huge photo op, and the left will rejoice, because, if the last 15 years has taught us anything its that, its not about the emission's, its about money and gaining political power. billg

Well AM, the US is doing just that - aligning traditionally non-aligned India with it so as to contain China. It's 19th and 20th Century brinksmanship but with a huge difference. It will not stop China's industrial engine from far outstripping America's this century AND it's being done by a descending power toward an ascendant country that holds well more than a trillion dollars of its currency in its foreign reserves. This doesn't seem to make much sense until you look at the patchwork of pro-Shia and pro-Sunni arrangements the US has gravitated into in the ME.

And Bill, my friend. You're always a fresh breath of unbridled cynicism. This is about emissions, my friend, something that will become inescapably obvious even to you before another decade is out.

Unbridled cynacism comes from being disappointed election after election by politicians who look into camera's and tell bold face lies! 40% of Ontario's GHG emission's are from coal fired electric plants...promised to be shut down 6 years ago...still operating, and, will have to operate for another 15 years, no scrubbers, and, in the last 2 years has had to actually perform to capacity. Mr Dion is running on a carbon tax platform that sets no limits to carbon emissions, if we're all happy to pay more tax's then emissions go up..honest to god if ol' Stevey Harper came up with a plan that didnt set targets or dates you guys would have a freakin' field day. The only honest party leader is Elly May Green...and she's plain nuts!
Cynicism??..not at all, I just know how big this country is and how hard it is to juggle power and promises. And Dion??...he'll never have to worry about his Carbon Tax if he is somehow elected, because, the day he ever try's to take 8 billion out of Alberta economy is the day the Alberta Seperatist Party is born, and, thats not cynicism, its the cold hard truth. billg