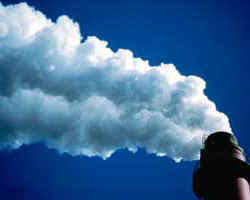 Looking at carbon emissions on a national basis, China versus the United States for example, is simplistic and misleading. China has four times the population of America. So, even if China has just edged out the U.S. in total emissions, it's per capita emissions are still a small fraction of the carbon footprint of the average American.

What's fair in that? Nothing. If you want to use that approach, why not judge the United States against a smaller country, say Lichtenstein? That would be silly, wouldn't it. Of course. America would say, "but you're just a fraction of our size, so it's not fair." Hmmm, isn't that what China and India are saying? Maybe we should assess America against the carbon emissions of Malawi. No, that would be even sillier, wouldn't it? Sure. Malawi's national GHG emissions and it's per capita emissions are miniscule compared to America's.

Trying to come up with a meaningful assessment on a nation by nation basis is virtually impossible. It leads each nation to seize the particular measure that best suits them as the one to use. The most populous countries want to go per capita. The most energy-consumptive nations want to the test to be total national emissions (provided the small countries are left out of it). The Third World? Who cares what they think? Apparently nobody.

There's also the debate about contemporary emissions versus historical emissions. The developing world says to the West, "you got rich by contaminating everyone's atmosphere, so you ought to make the deepest cuts." The West would like to ignore that point altogether.

Now there's another issue being raised, one that's of direct importance to Canada. A new report shows that nearly a quarter of China's total carbon emissions arise from the manufacture of goods for export. Who should be responsible for the problem - China or the countries that get the goods? From the Environmental News Network:

"[British] researchers, who embarked on their project in 2006 and have an end date in 2009, wrote a commentary note called the Tyndall Centre Briefing Note on the G8 meeting and suggested that a nation’s entire carbon footprint should also include imported goods and services manufactured elsewhere.

It’s an argument that is heard frequently. The supply chain logic follow through is gaining momentum in the corporate world these days in particular. As carbon calculations are increasingly getting more sophisticated, more and more companies are getting to the nitty gritty parts of their carbon emissions by including data on their suppliers.

The Tyndal researchers, Tao Wang and Jim Watson, make a number of strong points. First of all they suggest that China’s carbon emissions from goods exported to the first world are the equivalent of more than double the UK's emissions or the whole of Japan’s. That is quite hefty. Then they claim that industrialised countries are both historically responsible for the majority of carbon emissions to date and that they’re likely to have accelerated the rapid growth in emissions in these countries.

The arguments build up to the logical deduction that it makes sense for the developed world to get on with cleaning up the environment by imposing strict rules and by helping the poor countries along the road.

Wang and Watson’s calculation of just how China’s greenhouse gas breaks down firmly supports this argument. The numbers are taken from China’s official 2004 data (the most recent year for which full data was available) and they indicate that China is now the world’s top polluting country (having overtaken the US). And these results may be on the low side because between 2004 and 2006, China’s export increased from $32bn to $177bn."

The same issue arises out of the Athabasca Tar Sands project. The Tar Sands (and no, they're not "oil" sands) have become the strategic energy darling of the United States. Most of the production of synthetic oil is destined for the American market. Washington is urging us to quadruple production of their SUV juice. Why should the U.S. get the oil while leaving Canada saddled with responsibility for the emissions created to get them their fuel? It's not even as though Big Oil was paying the Alberta government anything remotely approaching realistic royalties.

Slashing global carbon emissions isn't going to be easy but there's almost no chance of it happening if we insist on simplistic approaches to emissions allocations. If emissions are measured in a way that's unrealistic or that fails to recognize valid factors such as population disparities, export production and so on, those calculations will be rejected as unfair by one or more of the key players. Unfairness dooms any hope of coming up with a global solution and, as far as the global warming problem is concerned, nothing short of a global solution will work.
Posted by The Mound of Sound at 4:03 PM

So you are saying that the solution to global warming is for us all to be as iresponsible as the third world and have many more children. Then on a per capita basis we will meet or comitment even though we will not have reduced our co2 at all. Sounds like fun to me. Do it for your country.

That must rank as one of the stupidest comments I've ever received on this blog.

No doubt about it....MOS. Anonymous at 5:50 missed the point of your blog. Greedy Western companies are in China using cheap labour while practicing crulty to Chinese workers and bringing the pollution levels up to match the North American levels. And anon interprets your blog with the comments made. It's difficult to understand how that mistake could have been made. A. Morris