What Do We Do If The Global Economy Fails? 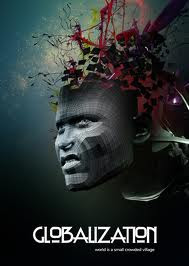 The global economy is a relative newcomer, at least for most of us.   There's always been global trade but it was subject to capital controls, tariffs and import restrictions.   Then, as the world moved out of the world wars and cold war of the 20th century, conditions arose that allowed the scrapping of capital controls, tariffs and trade restrictions and most of the world embarked on global free trade of sorts.

I think we're seeing now that global free trade has not worked as promised.  It created a certain surrender of sovereign powers by our governments and, with that, a transfer of political powers that fed the rise of corporatism and, in some countries, the ascendancy of the corporatist state.   Although we do our best to look the other way, there are countries such as the United States in which corporatism has insinuated itself between the electorate and the political classes, the ultimate corruption of the notion of government "of the people, by the people, for the people."

American corporatism is, arguably, the engine driving the evolution of the first modern "warfare state."  Imagine, one nation representing just 5% of the world's population carrying the burden of more military spending than the combined military spending of every other nation representing fully 95% of the world's population.  In that lies the utter cancerous madness of corporatism.  Even now the House is moving to cut $1.2 billion in spending needed to maintain in operation a satellite, hurricane early warning system even while continuing to squander $10-billion every month in Afghanistan.

But, while American corporatism may furnish the anchor of global capitalism, it's unclear that it will hold.   Globalization is the product of a number of favourable circumstances all coming together more or less simultaneously.   One key aspect is cheap transportation which, as everyone realizes, is threatened by the arrival of "peak oil."    The global demand for oil is going up even as production begins to wane, witness the quest for unconventional oil such as bitumen.   But transportation is just one of several critical factors needed for gobalized industrial capitalism.  What are the others and how secure are they?

Global corporatism is also entirely dependent on global social, political and military stability.   When your business relies on products from a dozen nations, instability in even just a couple of them can bring your operations to a halt.   Take Dell computers, for example.   A news/information item a few years ago focused on Dell's global manufacturing structure.   It emerged that every Dell computer was dependent on key parts and components sourced from something in the order of 30-countries.   A number of those components were single-source.  Upheaval in the source country could sever supply of essential components without which Dell would be unable to complete and ship its product.   The losses, it was said, would be devastating.

The 21st Century is already being called the "Century of Revolution."  Destabilizing change is upon us and is not limited to isolated countries here and there.  We continue to watch the Arab Spring unfold.  Tunisia, Egypt, Yemen, Libya have fallen and now Syria is entangled in upheaval bad enough that even its traditional Shiite ally, Iran, has broken with the Damascus government.   Waves of riots have swept European states - Greece, Italy, Spain, even Britain has not been immune.

One thing globalization has achieved is the concentration of wealth, and power, in the hands of the few.  American consumers hunker down in insecurity all except for one segment, the rich, who are buying luxury items at a furious pace.   At upscale stores, high-price goods are flying off the shelves.

This concentration of wealth has spurred wage stagnation, wealth inequality and the choking off of social mobility.   Making one's way up the social ladder is now far easier in Europe than in the land of the "self-made man," the United States.   America's middle class, blue and white collar, is in tatters, its anger shrewdly misdirected by the richest of the rich into hapless movements like the Tea Party where the vulnerable are taught to turn on their own.   Their homes under foreclosure, their savings lost, saddled with debt, their pensions, Social Security and Medicare under attack, they inhabit a dysfunctional nation more divided, and deadlocked, than at any time since the Civil War.

This sets the stage for an era just beginning to witness the impacts of global warming and climate change.   Earlier this week, the risk analysis firm, Maplecroft, released its 2011 Food Insecurity Index.  The map below shows countries with relatively good food security in green.   The rest face medium (yellow), high (brown) or extreme (red) food insecurity.   And this is for 2011 which marks just the beginning of the climate change impacts we will experience this century. 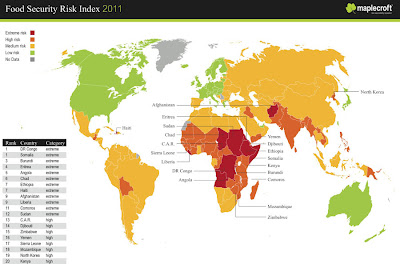 The US National Center for Atmospheric Research, confirming other predictions, has forecast global drought conditions that can be expected for 2030-2039 which are shown in the map below.

As can be seen, many heavily populated areas face protracted drought over the coming decades.  Drought of course drives famine, unaffordable food prices, mass population migration and wars.  It also undermines the global political, social and military stability so vital to globalization.
What then is the future of globalization for the world and for Canada?   We see many factors that imperil its continuation even in the mid-range but we show little interest in the question.   Is the global economy capable of functioning in this rapidly changing world?  If so, what will it need to do to adapt?   How should our country be changing its institutions and policies to facilitate adaptation requirements?  What do we risk if we don't?  What if the global economy dissolves under the forces of peak oil or widespread and protracted political, social and military instability?   What would we need to do to adapt to that?   How should our country be repositioning our institutions and policies to meet that potential challenge?  What do we risk if we don't?
We fear more the possible consequences of even discussing these questions than we do the potentially dire consequences of ignoring them.   And so we will continue with our heads firmly stuck in the sand.  Societies that fall into that trap rarely fare well.
Here's a thought-provoking, informative discussion of the future of globalization with Rob Hawkins from a series on peak oil and climate change produced by The Nation:

thank you
we need to talk about this in our municipalities, provinces and countries
and with our neighbors
we need to move from the model of the rugged individual,home, cars and garages and stuff to cooperative modes of living and lifestyles
we need to become a not dependant on personal automobile society

Hey, OEM. Here's something you might check out: www.transitioncanada.com. It's the adjunct to the British transition movement. What makes it all so worthwhile is knowing that, as a society, as a people, we have so many advantages and benefits available to us in this path.

Please let me know what you think.

If the global economy fails? "We don't need no water, let the muther f*cker burn!"