And Some Days the Bear Eats You 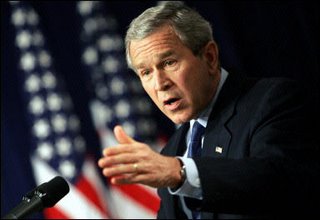 President Bush hasn't had a good time of it lately but, after the last two days, he must be wondering what's next?

First his daughter Barbara gets her purse lifted from beneath her table at an Argentine restaurant while under the watchful eyes of the Secret Service.

Then, during a stopover in Hawaii, the White House acting travel director, Greg Pitts, gets rolled coming out of a Waikiki nightclub at 2 a.m. Another wallet gone.

After that, three motorcycle cops crashed while escorting the president on his way to an air base for his trip home. Two of the officers were seriously injured during the mishap on rain-drenched roads.

The fourth incident, actually the earliest, came in Vietnam when Air Force One crapped out, forcing the president to hop a lowly 757 for his trip to Indonesia.

Sometimes things just don't work out.
Posted by The Mound of Sound at 1:10 PM