Too Risky to Say "Sorry" 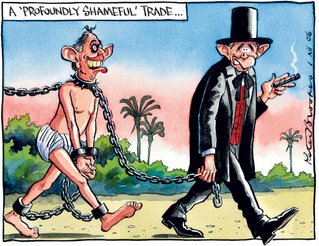 Canada decided to apologize and generously compensate the children of Chinese immigrants from many decades past who were forced to pay a head tax to get in. Now it's Britain's turn.

Tony Blair is about to apologize to the victims of Britain's once-flourishing slave trade. Well, actually it's more of a lament than an apology because we know how expensive apologies can become.

In his typical "oh gosh" manner, Blair deftly skirts the sticky part of this business: "It's hard to believe that what would now be a crime against humanity was legal at the time." I guess it was legal because the government of the day made it so in the Slave Trade Act, and that's good enough for Tony.

It's estimated that somewhere between 10 and 28-million Africans were sent to the Americas and sold into slavery over nearly four centuries. Britain alone managed to transport upwards of 300,000 Africans a year in its fetid, disease-ridden slave ships.
Posted by The Mound of Sound at 9:13 AM

You sound so outraged!!!! Too bad you don't feel the same way about the slaves kept today in countries like the Sudan. But of course, being a naieve lefty you tune out the real world.
Why didn't the libs appoligize . . . they basically controlled parliament since the 1960's . . . of course they were the ones that levied the head tax. Just like the lefties in the US, voted against civil rights, and still have an old KKK leader sitting as a dimocrat in the senate . . . Senator Bird.

Thanks for your always helpful and informative insghts NDIP.