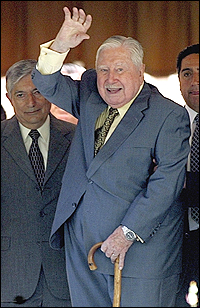 He's dodged it for years from Europe to South America, always just slipping through the fingers of justice. Now, former Chilean tyrant Augusto Pinochet took the opportunity of his 91st birthday to take responsibility for everything that happened during his brutal dictatorship. Augusto seems to have adopted the policies of George Bush and Don Rumsfeld - accept responsibility so long as it doesn't come with any consequences.

Pinochet, in his acceptance speech, accepted responsibility but with no apology or regret. What he did, he said, including the assassination of democratically elected President Salvadore Allende, was simply for the good of Chile. Along the way his regime subjected the Chilean people to arrest and torture and a good measure of murder to boot. More than 3,000 Chileans died at the hands of his security forces.

While he held power Pinochet wasn't a complete pariah. Henry Kissinger was a pal, Ronald Reagan liked him and so did this tart: 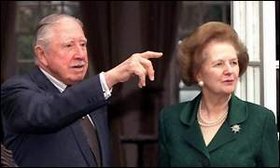 Augusto didn't miss the opportunity to explain that it was necessary to murder President Allende (23 bullets in the back if memory serves) to protect the country's "integrity" which is a funny word for copper mines.

He also sent greetings to his homeboys, "...my comrades in arms, many of whom are imprisoned, suffering persecution and revenge." Oh, those poor butchers. Imagine, made to stand trial. Now what kind of guy can feel sorry for such animals? Here's a younger Augusto and the boys from the good old days: 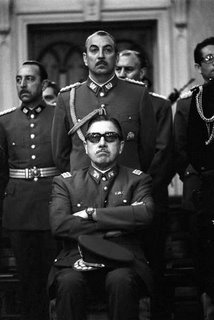