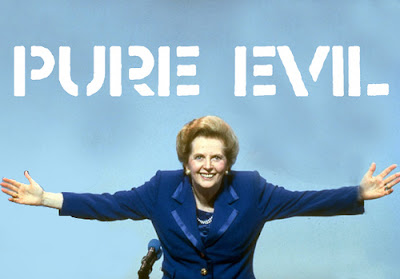 Ah, Margaret Thatcher, the giggles just go on and on.

There were not many people in this world that Maggie liked and a good many that she despised, among them the Irish.  She even toyed with the idea of cleansing Northern Ireland of its Catholic population.

Did Margaret Thatcher have a problem with the Irish? It seems a fair question after Peter Mandelson’s odd revelation the other day about meeting her after he had just been appointed Northern Ireland Secretary in 1999:


She came up to me and she said ‘I've got one thing to say to you, my boy’. She said, ‘you can't trust the Irish they're all liars’, she said, ‘liars, and that's what you have to remember so just don't forget it.’

With that she waltzed off and that was my only personal exposure to her he added.

This vignette is of a piece with what we know to be her attitude to Northern Ireland and Irish affairs more broadly; mistrustful, simplistic and, well, a wee bit bigoted.

In 2001 it came to light that Thatcher had suggested to a senior diplomat who was negotiating with the Irish government over the landmark Anglo-Irish Agreement in 1985 that Catholics living in Northern Ireland could be moved to live in southern Ireland instead. She made the suggestion to Sir David Goodall during a late night conversation at Chequers. He explained:

She said, if the northern [Catholic] population want to be in the south, well why don't they move over there? After all, there was a big movement of population in Ireland, wasn't there?
Nobody could think what it was. So finally I said, are you talking about Cromwell, prime minister? She said, that's right, Cromwell.

Cromwell’s policy of ‘To Hell or to Connaught’, forced Catholics to the less fertile lands on Ireland’s western-most province, forfeiting the land in the north and central parts of the country at the point of a sword in what we would now recognise as ethnic cleansing. Cromwell was also, in modern parlance, a war criminal too; butchering thousands of men, women and children as his forces cut a bloody swathe across the country.

That Margaret Thatcher - a million laughs!
Posted by The Mound of Sound at 11:57 AM

My Irish great grandfather arrived in Canada at the age of 12, Mound.

He's been gone a long time. But I swear I can hear his reaction even now.

A million laughs....????????? Hardly. That kind of bigotry is offensive. However don't run away with the idea Canadians are not bigots. Repectable bigotry goes on in Canada and that is not acceptable either.

Sorry, Anon, I assumed most would realize that was sarcasm. Maybe next time I should clarify that.

Yes, Owen, I'm sure he would have been pretty worked up over the Iron Lady and her baser instincts.