Why Mulcair Shouldn't Be Trusted to Govern Canada. 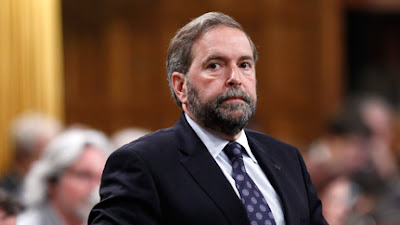 Any doubts whether T. "Tony" Mulcair is ready to govern Canada are resolved by his actions in the modest controversy over the Supreme Court of Canada's handling of the 1981 constitutional patriation case.

Estey, Bastien claims, told British officials the court was dealing with the patriation issue.  Laskin allegedly told British and Canadian officials that the justices were divided on the question and suggested when he thought a decision would be delivered.

That, apparently, is it.  Two allegations of two supposed communications, arguably inappropriate but, even if true, essentially meaningless except to those looking for something, anything to re-ignite those fires now more than 30-years past.  Among them is NDP leader, Tony Mulcair.

There is no sense that the personal communications described in the book were designed to influence the Court’s decision. Nor, it should be noted, were they successful if that was the aim. Even if we twist this story into one of crazy conspiracy, where Laskin was working with Trudeau to help bring about patriation, they did not succeed: Laskin was on the losing side of a Court decision that said Trudeau was bound, by convention though not by law, to seek substantial provincial consent.

The Quebec National Assembly is up in arms and so too is Tony Mulcair.  They're all demanding complete disclosure of all the court's documents and records.  In response the Supreme Court of Canada has conducted an internal investigation and reported that,
“The Supreme Court of Canada conducted a thorough review of its records and it does not have any documents relevant to the alleged communications by former Chief Justice Bora Laskin and former Mr. Justice Willard Estey in relation to the patriation of the Constitution of Canada. This concludes the Court’s review.”

There it is.  They went through the court's documents and files from 32-years ago and found no documents relevant to the allegations.

Apparently Tony Mulcair doesn't trust the Supreme Court of Canada.  In fact he dismisses the court's statement as "not credible."

“You won’t find something you don’t ask for. Those documents were given to Mr. Bastien by the Canadian government … and large elements were taken out. So the first thing that one would have expected the Supreme Court to do is to ask for the full version, read them, and start an investigation. Instead, what they seem to have said from this cryptic, one-paragraph statement, is: ‘We looked in our filing cabinet and we don’t have them.’ … It’s a clear indication that the Supreme Court had no intention all along of ever dealing with this issue seriously. But unfortunately, it is an extremely serious issue.”

It's not the Supreme Court's job to be demanding documents of the federal government.   The statement is not cryptic, except in Tony Mulcair's overheated mind.   The court reviews its documents, its records.  It can't even contact the judges.   They're long dead.  And no, Tony, this isn't an "extremely serious issue" except to those who see some political advantage in transforming it into one.

What's not credible is for an opposition leader, even one like Mulcair, to fan the flames for personal advantage.  I suppose Tony has read the latest polls showing the Liberals on the rampage in his former stronghold, Quebec.  Maybe Mulcair thinks his best shot at stopping Trudeau in his tracks is to re-ignite Quebec outrage from the nationalist side.   Mulcair is plainly reaching far beyond Bastien's allegations to suggest some much larger conspiracy and will fault the Supreme Court of Canada for not delivering evidence of what doesn't exist.

Or maybe Mulcair has figured out his federal chances are waning fast so he'd better settle for the chance to be the first New Dem premier of Quebec.
Posted by The Mound of Sound at 7:27 AM

I do not know how Mulcair expects to keep his Party alive outside Quebec if he keeps this up. It proves that his instincts are flawed with respect to the ROC.

That's the impression I'm getting also, BGB. Mulcair keeps showing that his instincts are deeply flawed and unsuited to the national stage.

Really? Kind of picking at threads that aren't attached to anything, doncha think?

I mean, what's wrong with wanting our most important court to make decisions based on FULL disclosure and research as opposed to potential supposition of the government of the day?

Mulcair's biggest vice is that he's honest and frank. People hate that, especially when it's the truth.

No, Anon, I don't think what you suggest. But that's because I know about law and courts and judges and justice. Sorry.

So you prefer Harper or empty headed Trudeau? Just wondering if we are now seriously talking about instincts, brain matter, and political smarts.

I remember when both Liberals and Conservatives repeatedly berated Layton for even suggesting talking to the Taliban in Afghanistan.
In end, that is what happen after years of lost lives, foreign but mainly Afghan civilian.

No, Jan, I don't care for any of the three but I don't agree that Trudeau is "empty headed". Odd that you seek to prop up Mulcair with Layton. Mulcair is not Layton any more than Trudeau is Ignatieff.

Just because this criticism is directed at Mulcair doesn't mean you'll have the slightest difficulty finding scathing critiques on this blog of Harper and, indeed, Trudeau.

My position is that Mulcair keeps showing himself unfit to lead the country. It seems a great many Canadians are coming to that same conclusion.

If I had a choice, Jan, I'd like to see your party go back and anchor the Left, help right the country's political keel, and again be of real service to the Canadian people.

Everybody is racing now for the middle something that breeds compromised principles and cynical opportunism. That includes your own Latter Day Liberals.

The Liberals and Conservatives have both proven that they are totally unfit to lead Canada. They are the ones who caused the country's problems in the first place! They've had their chances and they've kept screwing up. It's time to give them both the boot. Trudeau is Harper-lite, and cannot be trusted.

We should take decision all against bad things and care about it. Mostly students think custom essay writing online professional team can handle their situation of education but they should be choose right path.