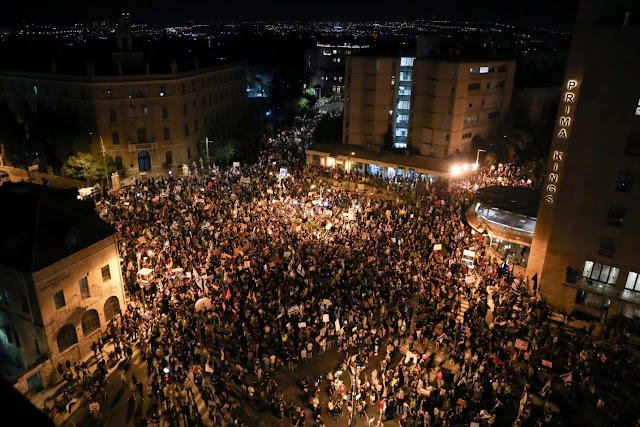 The far right and Covid-19 are best pals. Whether it's Trump's America or Bolsonaro's Brazil, Mahdi's India, BoJo's Britain, even Kenney's Alberta, Thug Rule does seem to encourage the pandemic's spread.

Now I know - there are exceptions. Netanyahu's Israel comes to mind. Wait, what's that?


WHAT CAUSES a country to succeed, or fail, in containing covid-19? Israel offers an example of both. When the novel coronovirus reached the country in March, Prime Minister Benjamin Netanyahu quickly ordered a border closure and a national shutdown, then held nightly news conferences to remind citizens to wear masks and wash their hands. He forged a coalition government with the leading opposition party that pledged to focus almost exclusively on the pandemic for six months.

Infections plummeted, to a low of 10 new cases a day in mid-May. Mr. Netanyahu’s poll ratings soared. “So far we’ve done it better than nearly every other country in the world,” he boasted. The hubristic prime minister then proceeded to demonstrate how not to manage the disease. He ordered a quick reopening of businesses, entertainment and schools. “We want to make your lives easier, to allow you to go out and get some air . . . to drink a cup of coffee and to have a beer as well,” he told Israelis. “So first of all, enjoy yourselves.”

The predictable result: Israel is now averaging more than 1,770 new covid-19 infections per day and ranks fifth in the world on a per capita basis in the past week, just behind the United States. Mr. Netanyahu’s approval rating has fallen from 74 percent to 46 percent, according to one polling organization. The prime minister’s official residence in Jerusalem and his home outside Tel Aviv lately have been the sites of near-nightly demonstrations led by infuriated young people.

They're all working from the same playbook. They're shown what works but they tire of it. Then they do a 180 and it blows up in their country's face. People die. Even more people have long-lasting damage. The economy tanks. Whatever progress they made or might have made is forgone.

(The photo above? It's Israeli protesters swarming Netanyahu's official residence this evening. Perhaps Trump had something like this in mind when he fortified the White House with a big, "no climb" wall.)
Posted by The Mound of Sound at 2:21 PM

I recently listened to an acquaintance tell me that Covid-19 is Earth's way of slowing down the human race.

As both a fan and citric of James Lovelock, I liked her angle.

Perhaps Gaia is shouting her loudest warning at these authoritarian miscreants who try to rule the world?

.. the tenure of Netanyahu appears to run till now, somewhat parallel to that of Trump. These are highly contentious countries.. locked in romantic embrace..and a one way money flow (oh gawd.. was that anti-semantic ? Canada backs this too ? Askin for a friend)

An interesting idea, NPoV, until you have to factor in the pandemics from history that really had nothing to do with human overload.

What once made pandemics much less lethal is that they had to travel "at the speed of sail." It took weeks to cross the Atlantic or Pacific. If the crew left port infected, the disease pretty much ravaged the ship long before it got to port. Ships that were infected, so called "plague ships", were quarantined in some distant corner of the harbour.

I saw such an event at Esquimalt. It was said the ship, a smallish freighter, had an outbreak of cholera. It was anchored out in the middle of the harbour and hoisted some flag or pennant, the colour of which designated cholera.

Today, of course, every coronavirus travels at the speed of a jetliner. It's quite possible that carriers can hop from one continent to another before they even exhibit symptoms. Can we quarantine the lot, just because?

The podcast I mention in the next post mentions Bill Gates' view that the next pandemic may be a man-made virus, a weaponized coronavirus. There's also a good discussion of the anthrax problem.

Now the Russians have found that the thawing permafrost is releasing once safely sequestered viruses, stuff that has been confined in the ice for centuries. The most notable instance involved reindeer killed by natural anthrax that were hauled off and buried in pits. The permafrost preserved both the carcasses and the virus.

What are we to do about these things? Do you hear any answers coming from our governments? I haven't.

Yes, Sal, Canada's Conservatives and Liberals have been shameless whores for Netanyahu. That much is manifest in Canada's deplorable voting record in the General Assembly on anything to do with Palestine or the Palestinian peoples.

When Netanyahu has flagrantly committed war crimes against Palestinian civilians we look the other way. The Israelis have a name for their strategy - Dahiyeh. The name is taken from a Beirut suburb where it was perfected. You first destroy the essential infrastructure - sewer, water and electricity plants. Then you attack hospitals and schools. Once you've rendered the area to ruins you begin attacking homes and apartment buildings.

Make no mistake, this isn't just Harper's handiwork. Trudeau is neck deep in this:

The Liberal government's approach has been to hold hands with the Conservatives and denounce support for BDS to be anti-Semitic. They also play footsie with the House of Saud and outright fascists in Ukraine.

There's no need to contrive excuses to be disgusted with Justin Trudeau. He provides all the reason anybody should need.

These guys share one trait -- monstrous self-regard. And, in the end, it proves to be self-destructive.

Yes, Owen, they come to office morally compromised and that plays out until they're finally removed.

30 years ago i started to blame "lawyer" thinking
either lawyers that became politicians
and believed that natural law could be circumvented for political or business purpose
or business men elected who with their lawyers did the same.
both thought that natural law could be manipulated just like imaginary man made laws contrivance for their own devices.
add that to the fact that humanity by nature is selfish, self centered,self justifying and highly opinionated as to what is "right" in each imaginary system
and behold the result.