Hmm, Tough Call. What to Open, Schools or Boozers? 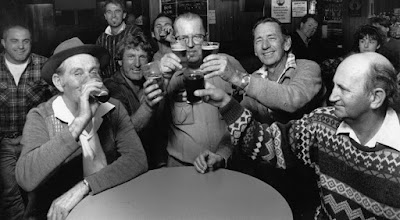 A scientist advising Britain's Tory government says it may be necessary to close pubs if schools are to open next month.

Prof Graham Medley told the BBC there may need to be a "trade-off", with the re-opening of schools seen as a "priority" for children's wellbeing.

It came after England's chief medical officer said the country was "near the limit" of opening up society.

Boris Johnson told a Downing Street press conference on Friday he needed to "squeeze the brake pedal" on easing restrictions, following a rise in coronavirus cases.

And England's chief medical officer, Prof Chris Whitty, warned the nation had "probably reached near the limit or the limits" of what can be done to reopen society, meaning trade-offs may be needed to allow pupils to return to classrooms next month as planned.

Asked whether restrictions of other activities may be needed to allow schools to reopen as planned, Prof Medley, chairman of the Scientific Advisory Group for Emergencies (Sage) sub-group on pandemic modelling, told BBC Radio 4's Today programme: "I think that's quite possible.

"I think we're in a situation whereby most people think that opening schools is a priority for the health and wellbeing of children and that when we do that we are going to reconnect lots of households.

"It might come down to a question of which do you trade off against each other, and then that's a matter of prioritising. Do we think pubs are more important than schools?"

So I wondered what Wales and Scotland are up to? They each have their own public medical authorities, so this is an England-only thing.

I took a look at both those two other countries' government's public health webpages (didn't go to Northern Ireland), and both are pages and pages of this and that. Can you have household bubbles with the English?, seems to be a Welsh concern. Scotland advises on taking daily Vitamin D, and discusses amounts by skin colour for example, due to northern latitudes. Scotland keeps certain people (166,000) at extreme likelihood of bad response to the virus at home isolated and has a system for food delivery and support. People aren't supposed to travel more than 5 miles!

"People in Scotland should continue to stay in their local area as much as possible and should not travel more than broadly five miles for leisure or recreation." But they are moving to their Stage 3.

They have 66 LTC homes with at least one case of Covid-19, but so far only 46% of deaths have occurred in them out of 4300 odd. So, anyway, their deaths per million are a bit lower than England, so well over twice as bad as Canada, but not as bad as Quebec which rivals England. The US still has to kill off a further 75,000 to rival the UK, 125,000 to claim the World Championship in every metric. I don't suppose Belgium will be sad when that happens.

Boris the Bozo is shouldering his Chief Public Health Docs out of the way to preen for the TV cameras, and blart away mightily for England. Typical Tory, like Ford in Ontario - does the name of Doug's chief PHO spring to mind? Or Quebec's? Alberta's Henshaw seems to hew not to a public health attitude but to a UCP agenda, offering excuses as thir caseload takes off, and has no real plan for re-opening schools -- a place to avoid is our rogue Alberta.

Meanwhile, with our new masking regulations in NS, (our Chief MO Strang is a UBC grad), finally even Galen Weston has got his employees to mask up at Loblaws, as I can attest. Free reusable mask handouts at libraries and DMV. Feels much better to venture out now. And only four cases over the last six weeks, all due to out-of-province/region travel. And for my sanity, the anti-mask nutbars on ProgBlog seem to have moved on to other hectoring topics, having had their "it's only flu" bleatings refuted.

From what I've read, BM, Nova Scotia has outpaced most provinces and territories on its pandemic response. Well done. I did a post this afternoon about how authoritarian governments have bungled the covid threat and ruined their economies in the process. For a long time it seemed Israel was the exception. Netanyahu was seen as a hero for delivering Israel from the contagion. His popularity soared. Then, like every other hard rightwinger he unlocked the economy prematurely. Now Israel's rate of infection is just barely behind America's and angry protesters have besieged Netanyahu's official residence.