Trump Heads For the Bunker 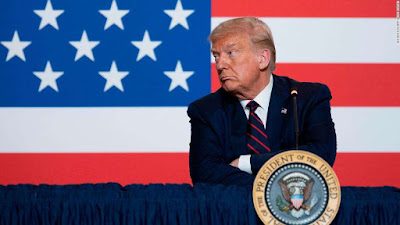 Has Donald Trump run out of steam? Has he lost his mojo? Is he in a Trump slump?

What did he really mean when he said earlier this week that "Nobody likes me"?

Trump was speaking about the popularity of his pandemic expert, Dr. Anthony Fauci.

It's been Trump's ugly nature to find excuses to get rid of people in his inner circle who become too popular for Trump's liking. For weeks Fauci was sidelined. Trump decided that he would deliver White House coronavirus briefings. Didn't work. The press wanted to hear from Fauci and they sought him out. Over the past couple of weeks, Fauci became the target of a smear campaign that sought to undermine Fauci's credibility. Didn't work. Fauci retained the respect of the American people. Trump's numbers tumbled.

But there's more to the Trump Slump than his tiff with Dr. Fauci.

In a week that saw a devastating global pandemic worsen, a record economic meltdown confirmed and an all-out bid to stoke racial tensions for political gain deepen, Trump is finding himself more and more the odd man out: absent and detached from the leadership of either party, locked in antique cultural battles and increasingly unpopular among voters.

Congressional Republicans seem to have lost their fear of their vindictive commander in chief. Many Repugs are now fearful that Trump could be an anchor around their necks, costing them seats in the House and perhaps even control of the Senate.

When Trump floated the notion of postponing the November elections, the Republican leadership rejected the idea out of hand.


By Wednesday, Trump's isolation from the leaders of his own party -- who are hoping to salvage what is shaping up to be a tough November -- seemed cemented. Aboard Air Force One, Trump indicated to associates that he would not intervene in the Kansas Republican primary, even after hearing appeals from both his political team and senior Republicans that the seat -- and control of the Senate -- was at risk if conservative firebrand Kris Kobach wins.

Trump is spending the first August weekend golfing but not at hurricane-threatened Mar-a-Lardo. He's gone to Trump National in Virginia (actually Washington, D.C.). The plebs can weather the storm.

Now Trump is again reduced to trying to revive hydroxychloroquine as a cure for Covid-19, another flop.


White House officials are still weighing their options for how Trump will formally accept the nomination, one person familiar with the planning said, including assessing sites around the country where he might deliver a prime-time address. Yet the task has proven difficult as Trump insists upon something dramatic while aides work to temper some of his expectations about the scale of the potential venues.

Aides say Trump has grown to recognize the extreme political peril he's created for himself less than 100 days until the election. When he speaks with friends, his grievances are long and his complaints are ample but his willingness or ability to alter course seems minimal, according to people who have spoken to him.

Trump has voiced versions of "nobody likes me" for the past several months, those people said, describing an in-the-dumps president brought low by a pandemic he feels he has little ability to control.

As a professional grifter from a multi-generational family of grifters, Trump probably always knew that  the voting public would eventually get wise to his nonsense. In 2016 Trump didn't have to run on his record. The guy had a TV show and some golf courses his base would never see unless they were driving a delivery truck. In 2020 Trump has a record, one he can't run from.
Posted by The Mound of Sound at 10:47 AM

Trump was trailing in the polls against the top Democratic contenders long before the coronavirus hit. Handled competently, the virus was an opportunity to turn things around, as Doug Ford is showing in Ontario. Even a nasty, lazy dog like Trump could have been leading the polls had he delegated to people more competent than Kushner and his frat boys.

But Trump's stupidity is both his downfall and what makes him especially dangerous. People who meet him are shocked by his lack of knowledge, with Tillerson famously calling him a moron. As Pastor Bonhoeffer wrote before being hanged for conspiring to assassinate Hitler:

“One may protest against evil; it can be exposed and, if need be, prevented by use of force. Evil always carries within itself the germ of its own subversion in that it leaves behind in human beings at least a sense of unease. Against stupidity we are defenseless.

“Neither protests nor the use of force accomplish anything here; reasons fall on deaf ears; facts that contradict one’s prejudgment simply need not be believed – in such moments the stupid person even becomes critical – and when facts are irrefutable they are just pushed aside as inconsequential, as incidental. In all this the stupid person, in contrast to the malicious one, is utterly self satisfied and, being easily irritated, becomes dangerous by going on the attack.

“For that reason, greater caution is called for when dealing with a stupid person than with a malicious one. Never again will we try to persuade the stupid person with reasons, for it is senseless and dangerous.”

I think of this whenever I meet Covidiots, and quickly move away. Trump's collapse in the polls shows that Americans are finally clueing in as well.

Competence has never been a Trump priority. He has instilled in himself a belief in the infallibility of his "gut instinct." He lauds himself as knowing more about military matters than his generals, more about this virus than his best medical experts and, for three and a half ruinous years, he has sucked America into his bubble.

Thanks for the Bonhoeffer passage. It is timely.