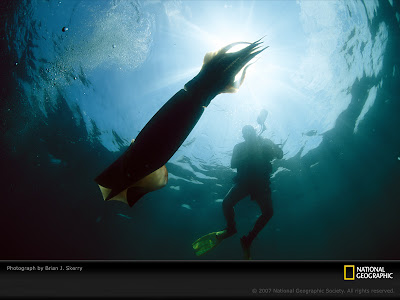 When they washed up in their hundreds on the beaches of Tofino in August most everybody thought it was some sort of fluke. How could the voracious Humboldt squid, denizen of
Mexico's Sea of Cortez and other tropical waters find their way en masse into the North Pacific? When they appeared again in droves in September it began looking as if they might just be here to stay.

CBC News reports that marine scientists are now planning to place tracking devices on some of these creatures to try to find out just what is going on:

...The Humboldt is a species of squid that, up to now, has been associated with waters warmer than those found off Vancouver Island.

"And they were asking, 'what are these,' because most people, myself included, we had never seen them before."

...John Payne, a marine biologist with the Pacific Ocean Shelf Tracking Project (POST), said the events show that oceans are changing. "And I think we're going to see a lot more strandings."

There's more than an academic interest in the squid's wandering ways. The animal is a voracious predator, said Payne, and fishermen off the Pacific coast are concerned about the impact of the squid on their fish catch.

"Hake trolls off the coast of Washington are catching 30 tonnes of squid, some of them as much as 80 tonnes," said Payne.

Hmm, we've got salmon stocks simply vanishing without a trace at the same time we're seeing the arrival of masses of new predator species migrating out of warmer, southern waters. Yes indeed, the oceans are changing and a lot more rapidly than anyone expected.

So what is the government of the day doing about it? Good question. I guess Steve might be roused from his perpetual nap when these things start attacking divers and swimmers. Attack? Yes, without hesitation. Scott Cassel of Escondido, California has been attacked repeatedly by Humboldts while filming documentaries. The nature of the Humboldt is evident in the outfit he's wearing: 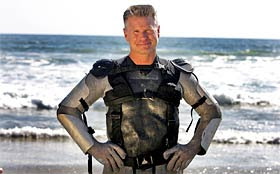 ...Cassell researched Humboldt squid for two years before he began diving with them. Humboldts, named for a current in the eastern Pacific, have a sharp beak, eight muscular arms and two retractable feeding tentacles that they use to attack their prey with more than 40,000 needle-sharp teeth at once.

“They shred you when they grab you,” Cassell said. “The fishermen in Mexico would rather fall into the water with a feeding frenzy of sharks than Humboldt squid.”

Cassell made his first dive with a group of Humboldts that were feeding off Baja California. The squid, which often grow to be 6 feet or longer, immediately attacked, Cassell said, pulling his right shoulder out of its socket, yanking him down so fast his right eardrum ruptured and cutting him so badly his wet suit was destroyed.

...“They're not just attacking you to scare you,” Cassell said. “They are attacking you to eat you, not necessarily to kill you. They don't care if you live or die as long as they get to eat.” 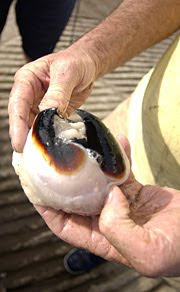 ...Humboldts are the most alien-like creatures on the planet, Cassell said, because they have three hearts, blue blood that is copper-based, the ability to swim at about 24 mph and excellent problem-solving skills. They live in water as deep as 3,000 feet, are as smart as dogs and are able to communicate with one another by changing their skin color from white to various shades of red, he said.
Posted by The Mound of Sound at 5:19 PM

Isn't it wonderful that people can't shake the wool out of their heads and know it's called GLOBAL WARMING. Are Canadians that dense? A. Morris

With winter approaching I can't help but remember last year when people were asking: isn't this supposed to be global warming time during the big snows and airport closures.
I wonder what will happen this winter.?
Somehow, people don't relate water temp to climate change.

Well OEM, it's a mega-El Nino year so we are probably in for a warm, wet winter. Last winter's was unusually cold thanks to El Nino's ugly stepsister, La Nina. Scientists are still trying to figure out why these phenomena are coming on so regularly in the past decade and what that may hold for the future.

Now the skeptics are ranting on about "global cooling" resulting from the global warming-driven melting of the polar ice caps. There is some research - of surface currents only - that suggests this will happen but, even then, the fellow who came up with the idea admits more intense warming will follow afterward.

These ignorant fools latch on to one suggested fact, ignore all the related circumstances, and use it to howl that global warming is a myth. These types genuinely abuse the privilege of stupidity.