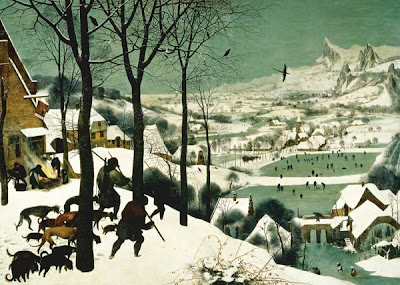 The persistent cadre of global warming deniers invariably points to the Little Ice Age to argue that sharp fluctuations in the planet's climate are normal, even routine. Until now.

The tinfoil hat brigade will be sad to learn that the Little Ice Age itself is now seen as anthropogenic or "man made." Okay, the global warming theory goes that man's rampant emissions of greenhouse gases causes the earth's climate to heat up but how on earth could man trigger a mini-ice age? Easy, we died off - in droves.

The revised theory holds that the Athropocene began, not with the discovery of coal power, but much earlier with mankind's implementation of agriculture. It was then we began clearing forests for fields and breeding all manner of livestock. It was deforestation on a grand scale and it spread quickly around the world. With steady and abundant food stocks man's population burgeoned and our carbon emissions steadily increased until one day, in the early 1300's, it didn't.

Enter the Black Death. The bubonic plague (the first of a variety of infectious disease epidemics that hit mankind back then) stripped much of Europe of half its population within a handful of years. The place became depopulated. In the centuries that followed, forests reclaimed farmland and wildlife returned to replace livestock. Abruptly, an agrarian society's carbon emissions yielded to an influx of carbon sinks - trees. This initiated a cooling. Cooler oceans absorb more carbon dioxide. Between the reforestation and increased oceanic absorption, scientists are now able to solve the mystery of the 10 ppm drop in carbon emissions during these centuries. That 10 ppm drop, caused by culling the mankind herd, created the climate phenomenon we know as the Little Ice Age.

The story of the Little Ice Age can be found in The Cold We Caused by Steven Stoll published in the November issue of Harper's. Here are excerpts from Stoll's article:

...What would happen to carbon dioxide and methane if humans disappeared? The answer is a tale not of drought but of rain, not of warming but of cooling. Its relevant technology consisted not of internal combustion and the steam engine but of horse collars and the moldboard plow. Excavate the Middle Ages, and one unearths a geological event with enormous implications for how we think about and respond to climate. ...the Northern Hemisphere fell into a frigid rut around 1350 that lasted until the nineteenth century. .

..Although we think of carbon dioxide and methane as the exhalations of industrial production, air bubbles trapped in Arctic ice say otherwise. In fact, the increase started 8,000 years ago, with the proliferation of agriculture. Forests burned by humans, whether for fuel or to clear for planting, released tons of stored carbon. Three thousand years later, rice paddies and domesticated cattle began to let off methane, which traps heat twenty-one times better than carbon dioxide does. And yet temperatures barely changed during these eight millennia. But around 1400, gases and temperatures both plunged, then recovered, then plunged again after 1500. Atmospheric carbon declined by a statistically significant 10 parts per million (ppm) in a period only slightly longer than a single human lifetime.

...The Little Ice Age coincided with a series of astonishing pandemics. The best documented began in October of 1347. Twelve galleys, heavy with trade from Caffa, sailed into the port of Messina, their Genoese crews groaning from sickness in the holds. At least one came ashore. The first Sicilian he greeted received a bacterial infection from a sneeze or a vaulting flea. A week later the Genoese sailor was dead, along with every Sicilian who had stood close enough to smell his breath. The afflicted buckled with fever and hard, bleeding ulcers: the first European victims of the Black Death.

Over the next four years, as many as 50 million people perished—representing half the inhabitants of Italy, the Balkans, Hungary, Lithuania, Germany, France, Spain, Ireland, Scotland, England, Norway, Sweden, Syria, and Palestine, as well as parts of Egypt, the Ottoman Empire, and Azerbaijan.

...the deaths of so many in such a short time, over terrain extending from the Po Valley to the Incan Empire, left hundreds of millions of hectares abandoned to reforestation. The rebounding woodland devoured 13.8 billon tons of carbon, accounting for more than half the missing 10 ppm. The oceans ate the rest, probably as part of a feedback loop set off by the die-off. (Cold water stores more CO2 than warm water, so falling temperatures would have created an ever more efficient carbon sink, leading to falling temperatures, before something broke the loop.)

And then mankind rebounded:

...Between 1700 and 1920 the world’s forests lost 537 million hectares, as agrarian societies increased their land use more than threefold. The carbon in all of those trees—together with soil itself, the greatest source on the surface of Earth—wafted up to thicken the eight-mile-high envelope that distinguishes this planet from Mercury.

Taking responsibility for the consequences of agriculture, capitalism, and industrialism is not the same thing as believing that humans control the tilt and wobble of the globe. It requires us to wield what control we have through public policy. ...It heralds the end, or so we can hope, of an approach to our atmosphere—as an infinite sink—that has financed industrial capitalism since soot turned the birds black in Manchester.

...By confirming the human role in climate change, and by declaring a warming world injurious to the public good, the EPA has swung a club against perhaps the grandest capitalist conceit of the twentieth century: that society forms part of the economy, not the other way around.

Ecology becomes policy when our responsibility becomes undeniable. So completely cultivated, walked over, and settled up is our planet that it no longer makes sense to regard any part of it as lying beyond human influence. To paraphrase Stewart Brand, we are the climate, and we might as well get good at it.

It's a great article. Get your hands on a copy of the November issue of Harper's.
Posted by The Mound of Sound at 9:15 AM

I received a reply to my letter to Prime Minister Harper asking what he was proposing to take to the
Summit in Copenhagen in December. The reply arrived via Jim Prentice via David McGovern. "Domesticallly the Government has set an objective that 90 percent of Canada's electricity needs be provided by non-emitting sources, such as hydro, nuclear, clean coal or wind power by 2020. Continentally, Canada is committed to working with the US in developing a coordinated approch to climate change that will advance our respective environmental and energy objectives as well as strengthen the North American economy. Internationally, Canada is working actively and constructively through the United Nations Framework Convention on Climate Change to develop and effective international agreement to address climate change in the post 2012 period. Canada believes it is essential that the global community commit to a path to achieve at least a 50 percent reduction in global greenhouse gas emssions by 2050." Why do I feel I'm no further ahead...smile ....you don't need to answer that, only if you wish. A. Morris

What's to answer? How does any nation essentially de-carbonize its society, its economy within just a decade? Harper isn't even trying to build public awareness of this problem much less federal-provincial consensus. Simply to overcome the intertia his government has inflicted on this problem is going to take years and the reference to "clean coal" is a plain giveaway.

BBC was very interesting last night. There was a mini debate regarding what needs to be addressed at the Summit in Copenhagen. There was a suggestion Obama may not attend. If that is the case, then Mr. Harper probably will not attend either. MOS are you aware of the leading Australian scientist on Global Warming Tim Flannery? His credentals include mammologis, palaeontologist and field zoologist. He has written many books regarding the environment. He said on CBC two weeks ago he does not understand why Canada is taking the stance it is taking. He said, Canada is openly dragging its feet and is influencing other countries. He also has said it is the yachtys that are causing the burn not the poor. A. Morris

Oh by the way, I'm not eating that stuff. A.

Hi AM. Yes, I am aware of this fellow. I have his excellent book "The Weather Makers" and would recommend it to anyone. It is brilliantly written and powerfully informative.

There are A LOT of problems with "The Cold We Caused" article.
http://www.e-thepeople.org/comment/43235993/view?viewtype=

Yeah what is happening can be normal until now, but if we continue by the same way we are going to be affected by an uncontrollable problem as the global warming is, and we can not permit that this happen.