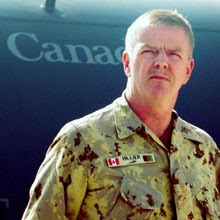 Safely retired ex-general Rick Hillier is worried. If, as some aides of former prime minister Paul Martin maintain, Canada's Afghan mission was Hillier's baby, the ex-gen has reason to be worried. His baby, after all, has turned out to be mainly one big, dirty diaper. Who wants that hanging around their neck?

So Hillier is fighting back. The Kandahar Khaos wasn't his idea at all he claims in his newly released memoir. It was a done deal between the Department of National Defence and the Martin government before he ever got the job. Hillier - why he was just following orders but he really thought Canadian forces should stick to the safe job of defending Kabul.

But, but, but... the Martin camp have been saying all along that Hillier lobbied for the Kandahar gig and only got PMPM's go-ahead on his assurance that Canadian Forces could do that job and have enough of everything left over to tackle another big mission somewhere else.

At first blush it appears that someone has a convenient take on history. Had the Afghan mission turned out to be a magnificent success would Rick Hillier have "blamed" the credit on others? Somehow I don't think so. Hillier was all too happy to wear the cloak of Afghanistan on his shoulders - until he wasn't. This excerpt of an article from McLeans at Hillier's retirement doesn't square with the Big Cod's account either:

...Hillier's chance to test a new role for the Forces and restore its public image came in another failed state: Afghanistan. Even before he was named Canada's top general, his Afghan credentials gave a serious claim to a place in Canadian military history. In 2003, he was chosen to head the UN-mandated coalition's mission, called ISAF, in Kabul. "That was the most significant command a Canadian general had held since the 1956 Suez Crisis," says Eugene Lang, who saw Hillier in action close-up as a chief of staff to two Liberal defence ministers, and also wrote extensively about him as co-author of Unexpected War: Canada in Kandahar. Hillier distinguished himself in Kabul, Lang says, by helping pave the way for Afghan elections, forging close bonds with Afghan leaders including President Hamid Karzai.

He came home with a personal commitment to Afghanistan that brought out a slightly romantic, somewhat sentimental streak not uncommon among successful soldiers. "I was enthralled by the Afghan people," he told Maclean's in 2005. "You had to experience their version of friendship to understand it." He expressed admiration for warlords seen by others as obstacles to a stable Afghan government. Even some who dabbled in the opium trade Hillier was inclined to excuse as motivated by insecurity about their place in Afghanistan's future. Anyway, they were all fine warriors. "They beat the Russians pretty fairly and squarely, at the end of the day they were responsible for thumping the Taliban and throwing them out along with a significant number of al-Qaeda folks," Hillier said. "I saw the finest leaders that I've ever had the opportunity to meet."

Given his intense attachment to Afghanistan, it's little wonder Hillier pushed for the chance to shift Canada's focus from the relative safety of Kabul to much more challenging Kandahar. Although the decision was approved by Martin and sustained by Harper, Hillier was the driving force behind Canada's mission to take on the violent Taliban heartland. "He's the architect of that," Lang says, "and he's the most outspoken voice for it in Canada." The job has certainly needed a passionate champion: from 2002 to 2005, Canada lost eight troops in Afghanistan; 74 have died since the move to Kandahar in 2006. Perhaps the most compelling evidence for Hillier's personal connection to Canadians and Canadian troops is that, despite that heavy toll, his popularity hasn't noticeably suffered.

Hillier has long known that he's been heralded as the architect and promoter of the Kandahar fiasco. He's had plenty of opportunity before to correct the record. He had many, many chances to pass the credit along to others but he didn't. To the contrary he appeared to revel in the notion of transforming his soldiers from a peacekeeping to a warfighting force. Does anyone remember at the outset of this business when Hillier puffed himself up and told eager reporters that his soldiers were marching on Kandahar to exterminate a "few dozen... ...detestable murderers and scumbags"? Remember those ultra-macho television ads about "Fight... With the Canadian Forces"?

So, unless and until Hillier can produce some smoking gun proof that Kandahar wasn't his idea, his gross miscalculation, I'll have a lot of trouble buying his 11th hour attempt to shift responsibility for "the mission."

Just in case he can't shift responsibility for the Canadian mission onto someone else's shoulders, Hillier also wants to put NATO to the sword. From the Toronto Star:

The NATO military alliance is a decomposing corpse that should be disbanded if it cannot find a winning strategy for the Afghan war, says former chief of defence staff Gen. Rick Hillier.

In his new autobiography, obtained by the Star, Hillier opines that unless somebody breathes air through NATO's "rotten lips into those putrescent lungs" the alliance will be done.

Once again, Hillier seems to be blowing smoke. Just what "winning strategy" does the Big Cod have in mind? What winning strategy did Hillier have in mind when he conjured up the Kandahar mission? It strikes me that there's never been anything remotely resembling a winning strategy in Afghanistan, never in the nine years this farce has continued.

Hillier wants to take swipes at NATO, presumably to avoid pointing fingers at his Pentagon buddies. After all, Afghanistan is America's war. Although there's never been a shred of evidence even suggesting Afghan or Taliban complicity in the 9/11 attacks, the Americans decided to topple the Afghan government. Even though the US was not under attack by Afghanistan it invoked the NATO charter to get the alliance on board. And then Washington promptly forgot about Afhganistan because it chose to play in that other sandbox, Iraq, instead. The United States walked out on us, on NATO, because the Bush regime needed to use 9/11 as a pretext for toppling Saddam.

If Hillier is looking for a "winning strategy" for Afghanistan he might do well to read the US military's counterinsurgency field manual, FM 3-24. The pearls of wisdom it contains reveal that both the American and Hillier's Canadian mission to Afghanistan ignored and neglected almost every fundamental precept of counterinsurgency warfare. But rather than examine the fundamental failings of Canadian military leadership in the Afghan affair, Hillier chooses to blame NATO instead for failing to come up with a winning strategy. To me that simply further undermines this character's crediblity.

No, Rick, I'm sorry but from everything I've seen and read the credit/blame for what's happened in Kandahar is very much yours. You may be the Big Cod but you're not getting off the hook that easy.
Posted by The Mound of Sound at 7:09 AM

Well thought out and well written. I went looking for more on Hillier because I remember him being quite hawkish on getting into Afghanistan and get busy killing.

Agree with Anon. Too bad your not a journo. Penny

My sentiments exactly. He decided to be the heralded King and instead he ended up to be one big mistake. A. Morris