There was something strange on U.S. weather/drought maps recently.   The northern hemisphere, or "polar" jet stream was shown plunging down into Mexico.  It was down where the sub-tropical jet stream is supposed to be. 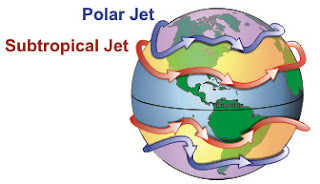 Mexico.   Not Oregon or even northern California but Mexico, a country that actually dips down into the tropics.   I do tend to pay attention to the jet stream, especially when it heads north up toward Alaska.   That tends to bring us warm, southern air and, in high summer, we get a high pressure cell that builds out in the Pacific off Vancouver Island that means hot, dry, sunny conditions - our respite from the Rain Festival we celebrate the other nine months of the year.

The northern/polar jet has changed.  It's no longer the gently undulating air current of the past.   It now swoops way up and way down and the increase in the north-south transition is slowing its west-east flow.   That easterly flow has been what has brought moderate fluctuations in temperature and precipitation.   The old jet stream was essential for modern agriculture.   Today's jet stream, with its magnified amplitude, brings droughts here and floods there, searing temperatures here and freezing temperatures there.   You get the picture, this is not a good thing.

The Poster Child nation for the new jet stream has to be Britain.  18-months back Britain was in the jaws of a severe drought.   Rivers were drying up, their beds exposed to the sun.   The country was facing a drought emergency.   Finally that wave moved on and a new one arrived, this time bringing floods and temperatures ranging from miserably cool to utterly frigid.   This Easter Sunday was Britain's coldest on record.   Across the northern hemisphere, unpredictable extremes are the new normal.

"The persistence of the spring's grim weather is particularly striking for it comes after a series of other extreme meteorological events in recent years. Last winter, a severe drought triggered stern warnings by the Environment Agency that water rationing and hosepipe bans would soon have to be introduced – until several months of torrential rain produced widespread flooding.

"Our weather, always unpredictable, is now fluctuating on a grand scale and becoming increasingly hard to forecast long-term. The challenge for meteorologists is to explain these unexpected outbreaks of climatic unpleasantness.

"'There is no doubt that the recent weather has been highly changeable – on both sides of the Atlantic,' said meteorologist Nicholas Klingaman of Reading University. 'We have blizzards and flooding. America has had droughts and scorching temperatures.'

"'The Arctic is warming faster than any other place on Earth,' said meteorologist Jennifer Francis of Rutgers University, New Jersey. 'Arctic temperatures have increased at more than twice the global rate. You can see this in the sea ice in summer there. In just the three decades, it has declined by 40%. About 1.3m square miles of sea ice have disappeared. That is an astonishing amount of ice to lose and it shows just how much heating is going on up there. More to the point, that warming is now changing weather patterns across the northern hemisphere.'

"The effects of this meandering are now being felt. As the jet stream slows, weather patterns tend to stick where they are for longer. In addition, the modest waves in the stream have increased in amplitude so that they curve north and south more frequently, bringing more weather systems northwards and southwards. Hence the cold conditions that have been brought south over Britain and which have persisted for so long."

"Until recently, this mighty stream of air flew round the planet, in a slightly wavy path, between 30 and 60 degrees north. However, times are changing – and so is our atmosphere."

Now, you might have thought that this sort of jet stream shift, not to mention our world's broken hydrological cycle, would have been on every leader's lips because these things are bound to play hell with your grandkids' lives.  Yet, judging by the lipflap from the Liberal leadership candidates, these things don't exist or at least they're not important enough to debate.   They've got plenty of time to discuss how we're going to extract, upgrade, transport and sell the world's highest-carbon, unconventional petroleum to world markets but none of them want to touch what strategies like that will hold for our grandchildren.  The New Dems are no better and the Harper Cons are at least a couple of shades worse or perhaps they're simply more honest about bitumen-peddling in a modern petro-state.
Posted by The Mound of Sound at 10:59 AM

I was doing one of my periodic scans of Small Dead Animals and noticed that just yesterday Kate put up a graph meant to ridicule the science of climate change. It conveniently ignores the unprecedented aberrations to the jet stream, the ever diminishing polar ice formations, and the catastrophic changes to ocean currents. They have never thought twice about the impact of industrialization. In fact, they haven't even thought once.

Predictably, Canada's version of the Tea Party continues to use the politics of division to confuse the dialogue. Conservatives may well doom the planet. Our current federal regime has amply proven itself to be hostile to science, dismissive of climate change, reckless with the environment, and ruthlessly intolerant of dissent. I hope they think it was a suitable price to pay in order to maintain their doctrinaire ideology, and to be obedient to the coporatocracy that lines their pockets.

To quote Chris Hedges, corporatism knows only one word, more.

I'm afraid the best we can hope for now is that humanity doesn't take out too much of the bio-sphere with it.

I don't believe the species of which I am a member has or deserves a future.

Deserves? Perhaps not. Has? Oh, definitely. Maybe a somewhat reduced one, but overall people are capable of surviving a wider climate range than the vast majority of species.
There will very likely be war, famine, pestilence and death. Quite possibly a drastically reduced world population, and not in pleasant ways. But that doesn't mean extinction.
Divide the world population by four and we'd still be the species with the most biomass on the planet.

These aren't potential changes that might or might not happen in the middle or late part of this century depending on how much our GHG emissions grow in the meantime.

This is here. It's real. It is tangible and measurable. Floods and droughts and extreme weather events of every variety are so commonplace in today's news that they no longer shock and, instead, now bore.

Perhaps that's it. The steady devastation of our biosphere has become too boring to hold our interest. We're no brighter than the frog that allows itself to be boiled to death.

@ PLG. I too don't think we'll face extinction barring a war that gets out of control. Some areas will be able to adapt, mine for example. The mountains that form the spine of this island afford natural opportunities for the construction of large reservoirs in case the snowpack begins to fail. Yet those areas that are advantaged will look all the more attractive to those displaced from other regions.

The population would help this environmental problem we have by being cut in half tomorrow. Sound horrible? You bet but it is what needs to happen and if I go with it...better for my grandchildren.

I'm not so sure. Extinction still looks like the most likely outcome to me.

Food. What? Won't be salt water fish. The oceans are going to take a few thousand years to re-evolve life large and plentiful enough to feed people.

Fresh water fish? Maybe for a few years in a few locations.

Large meat bearing mammals will migrate northward slowly but if there's a lot of pressure on the herds by hunters there could be an even larger die off than what climate change alone would cause. And one thing we know about modern humanity is that it cannot control its appetites.

Wheat is going to be a northern crop now but it's going to require a lot of forest clearing in most places to make the land plantable. Corn will be harder. Root vegetables will need storage systems that don't require refigeration (because there won't be any electricity).

Survival will require so many things to work out perfectly, in a time when so little will be even tolerable, and so profound a level of cooperation among people who haven't had to cooperate about anything other than traffic lights for a few hundred years.

I know it's impossible to know of course but my experience of humanity over the past 30 years or so doesn't give me hope. Quite the opposite.