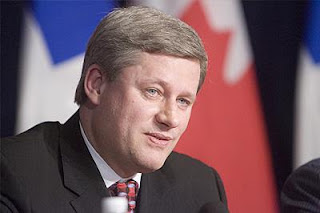 CanWest, normally the house organ of the far-right faction of the Conservatives, has come out accusing Stephen Harper of being an undemocratic, control freak:
Harper's claims of consensus government are at odds with the growing sense among many political observers and constitutional experts that Canada is run less like a parliamentary democracy in the Westminster model than like a private kingdom, in which the prime minister and a chosen clique of often-unelected advisers dictate federal policy, as long as their term in office allows them.
Three years ago, [Donald Savoie] published Breaking the Bargain, a landmark critique of the sidelining of the civil service, and the concentration of power in the prime minister's office. "What we've got today is less cabinet government, and more court government," he said in a recent interview. "Those with influence are those who sit in the prime minister's court."
But outside of a few individuals, "it doesn't matter a great deal who's in cabinet today, except that they get formal access to the court once a week - access to the king, the prime minister and his courtiers," says Savoie. "Generally, the cabinet no longer matters as a decision-making body."
As for Harpo, there's plenty of cabinet consensus: "I don't think outsiders are really in a position to make assessments of whether decisions are consensual or not, and to what degree the prime minister does or does not dominate the cabinet unless you're actually there, and you see the workings up close."
And when it comes to outsiders actually getting a glimpse of "workings up close" Harpo does his damnedest to make sure that'll never occur. Take, for example, the expulsion of reporters from the Charlottetown hotel where the Tory caucus was meeting.
I wonder if the right-wing media are becoming disenchanted with Harpo's inability to break out of his perilous, minority support from the Canadian public? It's pretty obvious that, unless he comes up with some enormously popular policies - and those would inevitably be Liberal policies - it won't be long before Harper might be facing some challenges from within. Stephen Harper's ace in the hole is that he has such a dearth of talent capable of doing better with Canadian voters.
Posted by The Mound of Sound at 10:14 AM

"It's pretty obvious that, unless he comes up with some enormously popular policies - and those would inevitably be Liberal policies - it won't be long before Harper might be facing some challenges from within."

And by Liberal policies you mean policies the Liberals cribbed from the NDP and the CCF before them.

And by Liberal policies you mean policies the Liberals cribbed from the NDP and the CCF before them.

You talking about the NDP/CCF policy of reducing corporate taxes because of all the benefits that wold bring to Canadians?

Oh I think Stevie has yet to pay the price.....but in the meantime,
take heart, it appears Jason Kenney is on the rise. At least he brings humor to politics.