He'll Make Sure of It 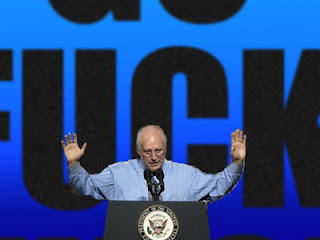 The creepiest and possibly most dishonest vice president in American history, the Dick, is hyping the success of the surge in Iraq.
Having transformed an entire nation into one, enormous humanitarian disaster, Cheney says the next report on Iraq will show "significant progress" in the war. Cheney told CNN's Larry King, "The reports I'm hearing from people whose views I respect indicate that the Petraeus plan is in fact producing results."
What few seem to be noticing is the shell game going on here. The purpose of the "surge" was to allow the Maliki government to stabilize and establish a system of laws to unite the country and resolve sectarian differences. That hasn't happened, not a bit of it. So, instead of coming to grips with the reality of that total failure, Bush/Cheney are going to instead say American troops aren't getting shot up as badly as they used to. Therefore we're winning. Not.
Progress on the battlefield was not what this was about - not until now. With nothing else to show for the effort - nada, zip, zilch - they'll change the groundrules and award themselves a great victory. It's what liars and losers do.
Meanwhile, remember what the face of American success in Iraq really looks like. One in three Iraqis in urgent need of emergency aid. 40% of the country's doctors, teachers and engineers gone. Two million refugees abroad and another two million displaced in country. 70% without adequate access to clean water. 80% without adequate sanitation. 92% of children with war-related learning difficulties. 800,000 kids dropped out. Sparse to, at times, non-existent electricity service. Severe fuel shortages in a country awash in oil. A government in tatters. Civil wars smouldering. Elections looming that will see the Kurds and Shia veto their country's constitution. This is the face of Cheney's Iraq. How successful does that sound to you?
The leader of the free world is a cheap fraud. And yes, the September report will be glowing, you can count on it. That Dick will see to it personally.
Posted by The Mound of Sound at 8:30 AM

My personal favorite is the little aside he throws in . . .

"yeah, and that prediction that the insurgency was all but cleaned up a couple years back. Yeah, wrong on that one. So as I was saying . . ."

And he still talks as if he has authority on any matter.

I did a search for an answer to a bingo question on netscape and found this blog, and this rediculous Mecca bingo song/video...Brace yourselves!.
Bingo Video. First I discovered Berryz and C-ute and Mesume, now this super huge chic group...What next!