Is MacKay Whistling Past the Graveyard? 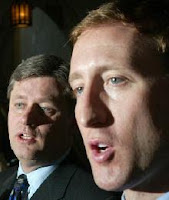 Peter MacKay, standing in as foreign affairs minister while Harpo is busy with other things, blithely dismisses Russia's claims to the Arctic polar region:
"This isn't the 15th century. You can't go around the world and just plant flags and say, We're claiming this territory.'
"There is no threat to Canadian sovereignty in the Arctic ... we're not at all concerned about this mission -- basically it's just a show by Russia," he told CTV.
A "show by Russia"? That show seems to be about establishing a contiguous link between the Siberian shelf and the undersea surface of the area Russia is now claiming. This show is about creating a claim under international law to an area we claim as our own, sovereign territory.
Michael Byers, Canada Research Chair in global politics and international law at the University of British Columbia, says Canada needs to identify possible underwater extensions to its own landmass before a 2013 deadline under the UN accord.
"Getting the work done on time will likely involve chartering a heavy icebreaker from Russia or Finland," Mr. Byers told CanWest News Service earlier this week. "So be it. The stakes involved more than justify the cost."
MacKay needs to get off his backside and tell us exactly what Canada is going to do - and when - to establish and defend our claim to this very territory. This is no time for whistling past the graveyard. The Russians aren't treating this as a joke.
Posted by The Mound of Sound at 11:35 AM

What else is new? Since when have Canadian politicans not be so naive.