So Broken, It Can't Be Fixed 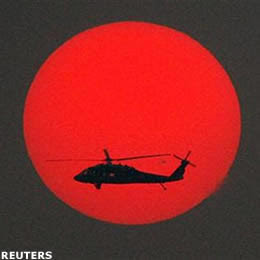 It's a reality that the White House can't bring itself to accept. Iraq is just far too broken to be fixed.

The government, particularly the security services - the folks with the guns, is in the iron fist of the majority Shiites and they have no intention of letting go. Between the Shia and the Kurds, the fix is in. One more set of elections and their people will veto the very deal America is trying to impose on them. That'll mean no constitution for Iraq as a unitary state but, then again, the Kurdish constitution which is incorporated into the Iraqi constitution means there really is nothing unitary about that government.


Can Iraq survive as a federal state? Probably not. The two sides with decades-old grievances against the former Sunni ruling class aren't interested in any deal that raises the resource-poor Sunni triangle up to their level of potential wealth. That would mean a gratuitous transfer of economic and political power to the same group that suppressed them, at times barbarously.


Once you look at Iraq as a cluster of 3-states just waiting to happen, the American/Brit military forces take on a much different complexion. At that point the Western forces exist to try to impose a political reality that two of the three Iraqi groups want to escape. The infidels become an impediment to the legitimate aspirations of both Shia and Kurd. They revert to their original status as occupiers.


In an earlier time the United States might have put in place a strongman to impose order and a government to Washington's liking. In fact that's what the White House wanted for Iraq until Sistani forced Washington's hand to call an election in which the neo-con's handpicked, pro-Western, secular slate was stunningly defeated. That was the writing on the wall for Iraqi unity.

With the departure of the central government's main Sunni bloc, Iraq's political viability is at an end. The Sunnis can see what's coming and can only hope that their walkout, on the eve of the September assessment of the surge, will cause the White House to pressure Maliki to yield to their demands.

Why did Iraq's parliament go on holiday with nothing achieved on their legislative "to do" list?

Did they leave not realizing that they hadn't met even one of the benchmarks they were to have achieved by September? Is this a parliamentary temper tantrum?

Were they like a bunch of irresponsible college students skipping class in order to hit the beach?

Were they playing hookey or have they actually dropped out?

Is this an "I don't have to and you can't make me. You're not the boss of me" moment?

Isn't it curious that you don't hear these obvious questions bandied about much in the Western media? You don't hear Washington pols raising them either.

Think about it. The notionally sovereign government of Iraq having the nerve to stage a soft mutiny against Washington even as the Baghdad parliament begins to collapse.

We may be seeing the endgame in Iraq orchestrated not from half a world away but by the Iraqis themselves. Maybe they know what we haven't been willing to recognize - that the Iraqi state is now so broken, it can't be fixed.
Posted by The Mound of Sound at 9:05 AM