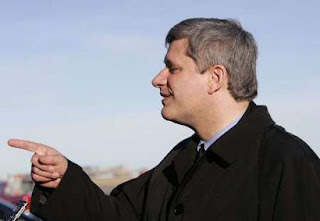 Stephen Harper is reportedly about to shuffle the lackeys who carry his water. In other governments they'd be known as cabinet ministers. This, however, is the Emerald City and Harpo is the Wizard hisself.
The fiercely top-down, uber control freak is supposedly going to shuffle a bunch of people whose names and identities are all but unknown.
Now, in fairness, Harpo may not be good at delegating authority, but at least taking on a cabinet portfolio in his government isn't a speaking role.
Posted by The Mound of Sound at 6:34 PM

About all a cabinet shuffle will entail, who gets to stand behind Harper during an announcement.

There not much to choose from - but then, it doesn't matter because the Big Kahuna is in control. They just have to fill in a seat and repeat the PM approved rhetoric and messages.

So, we'll get more of the same, just different seat order.