"A Time and a Place for the Media" 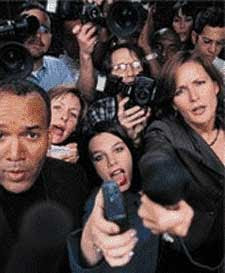 From the day he became Prime Minister, Stephen Harper has been bitchslapping the Canadian media. He's shown them no respect, sharply limiting their access to him and other members of his caucus. He's still doing it because our national journalists have shown themselves too cowardly to stand up to him. They let Stephen Harper control the news. Astonishing.
They got another dose of Harpo's medicine in Charlottetown yesterday where the Tory caucus is holding its annual retreat. At the direction of the PMO, the press were booted out of the hotel where the caucus is meeting. Each and everyone of these bold, courageous scribes was put out on the street, just like the trash. From the G&M:
One RCMP officer told a reporter that "there is a time and a place for the media." Another said they were acting on the orders of the PMO.
National caucus chairman Rahim Jaffer defended the action, saying that spouses and children accompanying many of the 125 MPs and 24 senators may be intimidated by the reporters and cameras.
So if you're looking for that special gift for a member of the parliamentary press gallery - why not a lovely set of knee pads?
Posted by The Mound of Sound at 11:21 AM

The Canadian population has always been treated with disregard by politicans from any government in power. It's all about Canadian apathy.