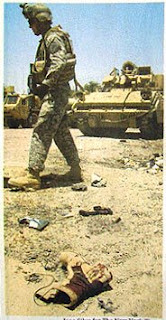 John McCain's grasp of history and current events is pretty wobbly but his vision for the near future must be giving nightmares to America's hostage soldiers.

The Bush regime still maintains the tyrannical "stop loss" cudgel to force its soldiers, regulars and reservists, to keep on serving - and fighting and dying - for years beyond their intended commitment.

There are now American service personnel on their third, sometimes even fourth tours of duty in Afghanistan and Iraq, many essentially held against their will. The reservists, in particular, have found themselves trapped with desperate families and ruined businesses or careers awaiting their eventual return home.

The giveaway is found in McCain's recent speech where he outlined his vision for bringing American troops home after winning Iraq and Afghanistan by 2013. This is what he said,

"By January, 2013 America is welcome [sic] home most of the servicemen and women who have sacrificed terribly so that America might be secure in her freedom."

By 2013 some of these indentured troops will have served in combat longer than any Western soldiers for centuries.

Years ago I read some post-WWII American studies of just how long the average soldier can function in combat. The results were quite interesting. Long before the body goes, the mind fails. Often the soldier either becomes unusable or deeply disturbed. There are already plenty of reports of psychological damage being sustained by American troops due to extended tours. What will four more years of fighting bring to these who have already "sacrificed terribly?"

There's not even a slight chance that McCain would ever get congressional approval for a draft. That means, as Rumsfeld said, "you go to war with the army you have." McCain's war is going to have to be fought, on and on, by the very same army that Rumsfeld had back in 2003 when he launched the adventure in the Iraqi sandbox.

I wonder if John McCain's memory is good enough to recall what happened the last time the American army became hopelessly demoralized?
Posted by The Mound of Sound at 10:35 AM

Update: As if America's Hostage Soldiers who have "sacrificed terribly" already didn't have enough to worry about, a group called VoteVets.Org released a leaked, internal Veterans Administration e-mail directing staff to refrain from diagnosing PTSD or Post Traumatic Stress Disorder.

"Given that we are having more and more compensation seeking veterans, I'd like to suggest hat you refrain from iving a diagnosis of PTSD straight out. Consider a diagnosis of Adjustment Disorder, R/O PTSD.

"Additionally, we really don't or have time to do the extensive testing that should be done to determine PTSD."

The entire e-mail can be found here: