That's right, high level rivers of moisture crossing the globe.   Some are thought to carry more water than the Amazon.  A report in New Scientist claims it was an Atmospheric River (AR) that caused the UK's worst floods. 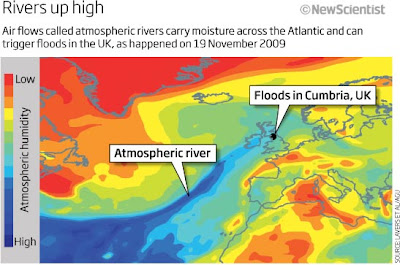 "Atmospheric rivers (ARs) are giant ribbons of moist air, at least 2000 kilometres long and several hundred kilometres across, which move water across the mid-latitudes. They flow in the lower troposphere, where winds with speeds in excess of 12.5 metres per second can carry as much water as the Amazon river. At any given time, four or five ARs carry nearly 90 per cent of the moisture that is moving towards the poles."
Posted by The Mound of Sound at 8:41 AM