Is America Finally Coming to Its Senses? 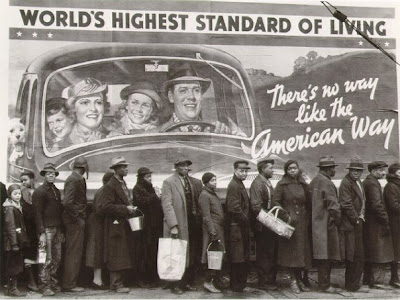 According to Salon's David Sirota, America is coming to its senses.  He attributes it to a recent awareness of just two things - his country's burgeoning wealth gap and its collapsing social mobility.

When even the most local of television journalists are compelled to acknowledge this crushing emergency in a country whose media aggressively promotes American dream agitprop, it means the Occupy protesters have scored a monumental victory. You can almost imagine a Wall Street CEO turning to an aide and muttering a slightly altered riff off LBJ: “If we’ve lost Ron Burgundy, we’ve lost Middle America.”


"...the last three decades have invalidated our standing hypothesis. After the conservatives’ successful assault on the New Deal, America has lived a different reality — one perfectly summarized by a new Federal Reserve study revealing that today’s increasing inequality accompanies comparatively low social mobility.


“U.S. family income mobility has decreased over the 1969-2006 time span, and especially since the 1980s,” notes the Fed paper, adding that “a family’s position at (the) end of (the) 2000s was … more correlated with its start position than was the case 20 years earlier.”
Of course, some class mobility still exists. The trouble is that it’s primarily of the downward kind. As the Pew Charitable Trusts reports, roughly a third of those who grew up in the middle class have now fallen below that station in adulthood.
...this is why, among all the fights over economic policy, the debate about taxes is the most crucial of all.
As the Fed noted in a separate report, the federal tax code — which remains vaguely progressive — has been the one proven way to “mitigate income inequality.” But with congressional Republicans gradually flattening federal income tax rates and with already-regressive state tax rates in GOP bastions like Texas, Wyoming, Tennessee, South Dakota and Mississippi, the tax system has lately been preserving or exacerbating existing inequality.
But coming to their senses won't be enough.   The forces of what George w. Bush referred to as the "'haves and the have mores' - my base" aren't going to give up three decades of enormous advancement at the expense of the American people, at least not without a fight.   Yet it's a fight they're not going to win if only because they can't.
Posted by The Mound of Sound at 7:22 AM