A Couple of Thoughts on Remembrance Day 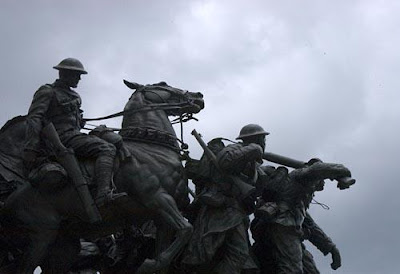 On this day I sometimes thumb through my dog-eared copy of Barry Broadfoot's "Six War Years, Memories of Cahadians at Home and Abroad (1974)."   Broadfoot used the same technique as he did for his earlier Depression-era work, "Ten Lost Years."  He traveled the country with a tape recorder and sat down with hundreds of people to get their memories before they were lost forever.

One thing that comes through with real clarity is that not a lot of these men and women signed on with the altruism we venerate at our cenotaphs.  One young guy said he joined the army to get a pair of real boots.  Others joined because that seemed to be the "thing to do" at the time.  Some just wanted employment or the chance to go to sea or to learn to fly.  Others wanted the adventure of war fighting.  Some enlisted just to get away from the old lady and the kids.

On Remembrance Day we omit all these people.  We cherish those who answered the call to defend Canada or to defend democracy or to fight fascism.  But they were just a subset of the masses who signed on, a slice of a Venn diagram.   Why don't we equally recognize all the others?  Were their deaths or mutilation any less deserving of our appreciation because their motives for joining were less than altruistic, anything but patriotic or even as petty as wanting a pair of boots?

To me, it cheapens Remembrance Day when we portray the dead as something many were not.  Worse yet, when we reconfigure the dead to suit a deceptive narrative we both demean them and  romanticize war.  Enough.
Posted by The Mound of Sound at 9:56 AM