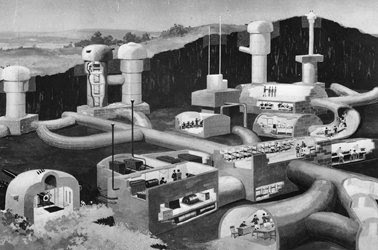 The Maginot Line.  It was a massive, intricate, costly and high-tech line of fortifications the French built along the German border to defend themselves after WWI.  The line consisted of fortifications, bunkers, trenches, tank obstacles, artillery casements and machine gun posts to forever secure France from another German invasion.

The Maginot Line was indeed a formidable obstacle, so formidable that when, in 1940, the Germans decided to conquer France, they simply went around it, sweeping into France through Belgium and the Ardennes.

As pointed out by Wiki, the Maginot Line, "had state-of-the-art living conditions for garrisoned troops, including air conditioning, comfortable eating areas and underground railways. However, it proved costly to keep, consumed a vast amount of money and subsequently led to other parts of the French armed forces being underfunded."

In other words, the French thought a massive, high-tech but unresponsive and inflexible defense would solve all their problems.   Sound familiar?   The F-35 Joint Strike Fighter is Canada's $30-billion Maginot Line.  It sounds great, at least according to the brochures, but it leaves us entirely dependent upon and vulnerable to a defence system that's inadequate and readily circumvented by any of the credible adversaries it's intended to thwart.

The second largest country in the world being defended by 65-mediocre performance fighters?   Holland, roughly the size of Vancouver Island, is planning to buy 85 of these and it is surrounded by friendly air forces.  Ah, but wait.  The other shoe has dropped.  Now that the air force has got the ring securely through the Harper government's nose, it's doing what should have been anticipated - it's whining for more aircraft.   Having pulled the number 65 out of its blue serge arse and force-fed it down the throats of a gullible and ideologically bent DefMin and his boss, Harper, the air force planners now say that 65-won't be enough.

“Canada is the only country that did not account (for) attrition aircraft” in its proposal, said an undated capability-and-sustainment briefing given to senior officers late last year.

...Air force planners began to sweat after crunching attrition numbers for the new stealth jet last fall. They looked at the CF-18’s accident rate per 100,000 hours of flying time and determined the F-35 might be able to evade radar, but it can’t escape fate.

“Canada will lose aircraft; not a question of ‘if’ but ‘when,’” said a Sept. 14, 2010, report.
On the upside, the planners believe that the highly automated F-35s will likely lead to fewer human-error — or “pilot-distraction” — crashes.

...The concern has been flagged to the attention of the Harper government, which “will consider the acquisition of replacement attrition aircraft,” said the briefing.

So, the 65-aircraft buy is a load of bunk and Harper knows it?   Like a devious teenager the Born Again bastard has just been lying his ass off to the Canadian public to mislead them about this entire miserable venture.    And isn't it amazing that, while other prospective buyers, including Britain and even the US itself, are already talking about trimming their F-35 commitments (which will even further drive up the unit costs), Canada will be left having to substantially increase our order and probably prepare for getting yet another aircraft 15 to 20-years down the road.

But, bear in mind, the F-35 buy has always been a political decision.  The backroom boys in blue at DND are looking to score brownie points with their big brothers at the Pentagon.  Harper is likewise looking to look good with his big brothers in Washington.  When you're that eager to please, clear thinking can be tossed straight out the window.  That's why some, including former Globe editor, Geoffrey Stevens, say it's a good bet when the dust settles that the F-35 won't be joining the Royal Canadian Air Force. 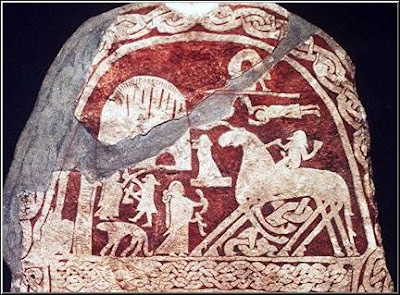 What in Odin's name is wrong with us?
Posted by The Mound of Sound at 6:50 AM

I fear the point is simply to spend spend spend, on prisons and jets, until there's "nothing left" for health care, etc., and it is "necessary" to impose austerity. We don't even know for sure whether $30 billion is but a conservative estimate (no pun intended).

Eric Margolis, in his book, American Raj, pointed out that countries should expect to spend 2 to 3 times more than the purchase price of the fighter jets (for continuous maintenance and upgrading costs over the lifetime of these jets). Thus if he is correct, we will likely end up spending $60-90B (assuming these planes will cost $30B). Margolis had observed this in the mid East/ African countries that had purchased these modern jets over the last few decades.

These costs would likely be even more relevant in the case of the F-35s based on the widely reported technological/design/communication issues with these planes.

So the real question is why the Harper government is so adamantly insisting on buying these jets, especially on a sole sourced, non competitive basis? Is it simply ideological or something else?

turkeys in the air and princess in the hanger