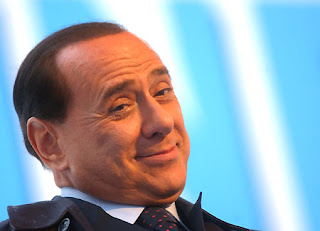 According to Reuters, Silvio Berlusconi has announced he'll step down, resigning as Italy's prime minister as soon as a budget reform bill is passed.

"After the approval of this finance law, which has amendments for everything which Europe has asked of us and which the Eurogroup has requested, I will resign, to allow the head of state to open consultations," he told his own Canale 5 television.

Berlusconi has used his tenure as prime minister to forestall being prosecuted for corruption and other charges.   Resignation would seemingly leave him stripped of his temporary immunity and it's hard to imagine Silvio waiting around to spend years in the Greybar Hotel.  It's a safe bet that, unless he can negotiate some sort of amnesty deal, Silvio won't waste much time getting his overactive backside the hell out of Italy.
Posted by The Mound of Sound at 12:55 PM

Email ThisBlogThis!Share to TwitterShare to FacebookShare to Pinterest
Labels: Berlusconi