The UN recently issued a report warning of the effects of global warming on the world's major river systems.  Increased evaporation, drought and irregular rainfalls are expected to leave water levels chaotic.  Even Europe isn't immune.   Drought this summer hit the Danube, Europe's second biggest river system, and closed much of it to navigation.

"Problems on the long waterway are literally coming to the surface. In Prahovo, a harbour in Serbia, due to the low water level, the rusty bows of German ships from the Second World War can be seen pointing skywards. The Germans scuttled a fleet there in the summer of 1944 to prevent ordnance coming into the hands of the advancing Russians and partisans. There are still 22 German vessels on the Serbian riverbed and more than one hundred on the Romanian side.

"It is an inheritance that you are normally unaware of. Experienced captains have been navigating around them for decades. In the same way as they have also been slaloming around the shallows and guarding against dropping their anchors in one of the eight areas in Serbia where the river possibly conceals unexploded bombs from the NATO airstrikes in 1999.

"...Due to the low water, cargo vessels with a draught exceeding 1.70 metres can hardly progress. They face a seven-hundred-kilometre stop-and-start journey along dry, yellow riverbanks to the Black Sea. Tens of them have run aground on sandbanks, hundreds of cargoes face delay or have been transferred to trains and trucks."

In Romania, this cruise ship ran aground.  The passengers were offloaded and bused to Bucharest. 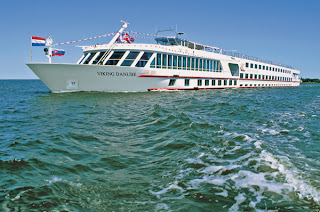 "The Romanian Transport Ministry has recently asked the Government for EUR 1 million (RON 4 million) to unblock the 257 ships that are blocked on the Danube as water levels have dropped in recent days, and to remove the “risk situation”. The Ministry didn’t specify what method will be used to do so."

We'd better get used to it.   This is the new normal and that means we're all going to have to spend an awful lot of money on climate change adaptation.   Sooner or later you have to pay the piper.
Posted by The Mound of Sound at 9:23 AM