"Boring" Thy Name is August.

If it wasn't for Covid-19, the climate crisis and the world generally spinning off its axis, this would be a painfully boring time in Canada.

August is traditionally a quiet time. People flock to the cottage, get outdoors, do the party thing. Not this year. Many of us are under some form of house arrest. Yeah, it sucks, but so what?

WGAS? Who gives a sh*t? I don't. I can't imagine why anyone should. It's like having to watch re-runs of a lousy sit-com because that's all the bunny ears will bring in up at your cabin.

Canadian politics is moribund. Boring. The Tories are on the verge of handing us a boring Conservative leader who will be a placeholder for a better leader who knows this is no time to make his/her move. Jagmeet is sinking in sincerity. The Greens? I don't know, what have you heard?

The Yanks are burying civil rights legend, John Lewis, today. Herman Cain (you, know the pizza guy who wanted to be president) will be settling for a far more modest sendoff in a couple of days. Covid-19 apparently.


Meanwhile the dumbest man on Capitol Hill, Louie Gohmert (as in 'Gomer'), is also down with Covid-19 giving Nancy Pelosi an excuse to demand masks be worn in the House. 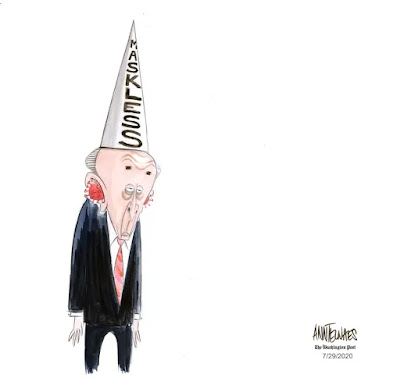 Trump is talking about postponing the elections scheduled for November 3rd until he can get his poll numbers out of the toilet. That's a bit like inviting the condemned to set his own execution date. Even McConnell wasted no time telling Trump to forget it.

The climate crisis worsens by the month not that anyone is noticing. That's the really nice thing about nature. She goes about her business gradually, quietly, so as not to raise a fuss. That's not a good thing for a species as myopic and easily distracted as our own.

Well, August is upon us. Today is going to be our first hot day of the summer. It could hit 27 or 28 C today but a "strong onshore flow" developing Friday should bring us back to something more befitting our gentle coastal sensibilities.
Posted by The Mound of Sound at 8:28 AM

Herman Cain - last seen without a mask at Trump's Tulsa rally. Without knowing anything about Cain's preexisting health conditions, as an elderly Black man, he hit three of the Covid risk factors. If people are presumed to intend the foreseeable consequences of their acts, Cain is a GOP martyr. May he be blessed with eternal tax cuts.

Now that you mention it, Cap, I do recall Cain sitting in the midst of a contingent of black Trump fans at the Tulsa rally. I seem to also recall Cain being interviewed at the rally. That's worth following up.

It was 36 here today in the far south of Alberta and will be again tomorrow. If you would kike to read more boring, look for the Medicine Hat news from the 28th. It’s all set out for you on the first page. In my estimation this is a group of ex German prisoners of war rattling a chain. There could be a lot of trouble for Jason Kenney maybe....a bit off topic but ?
Anyong

Anyong, I don't have a clue what you're on about. I did go online to the MHN for July 28th. What got you so exorcised? Some article about how Trudeau should resign? Did you expect anything else? Maybe you should get the Red Deer paper. They probably want to hang him.

On the front page of the Medicine News paper...title..."Group Ants fair deal, or else July 28th Anyong
Sopporters of Alberta separation etc