When Munich Re Walks, You've Got a Problem 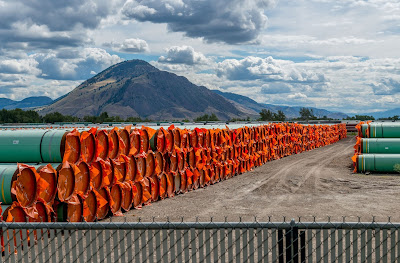 One of the world's biggest insurance giants, Munich Re, is pulling its coverage of the Justin Trudeau Memorial Bitumen Pipeline, a.k.a. Trans-Mountain.

Munich Re is one of a number of insurers washing their hands of anything to do with the Tar Sands and this damned pipeline.


“Munich Re has a policy on oils sands in place, covering both investments and insurance. We no longer insure the extraction of oil sands or related dedicated infrastructure on a single risk basis. And we do not invest in companies that generate >10% of their revenue from oil sands extraction.”

This is not particularly new. In February, the world's biggest investment house, BlackRock, announced it was ditching all things Tar Sandy.


“If you look at how destructive oil sands can be, there’s a very strong rationale,” Armando Senra, head of BlackRock’s iShares Americas funds, said in an interview, saying that Alberta’s oil fields, along with coal, are “the worst offenders, if you want, from a climate perspective.”

It wasn’t just financing that suddenly seemed at risk. Some of the world’s largest insurance companies, including AXA, Swiss RE and Zurich Insurance, announced they would stop providing coverage to projects in the oil sands, which are sometimes referred to as tar sands, as well as no longer investing money in those projects.

In December, the American insurer The Hartford said it would no longer insure or invest in companies that get more than a quarter of their revenue from oil sands or thermal coal mining. “We selected coal and tar sands because they have been identified as leading contributors to carbon emissions,” said David Robinson, the company’s general counsel.

In February we also learned that the federal government underestimated the cost of building the expanded pipeline by a staggering 70 per cent. Having already paid far above market value for the pipeline this is insult atop injury from a government that just can't bring itself to say "no."

Today's Globe and Mail reports that the Oil Patch giants are now scrambling to deal with record debts that are coming due.


The pace of restructurings and bankruptcies has been slow as banks have little desire to own assets, and as rebounding oil prices offer hope, said Alan Ross, regional managing partner with law firm Borden Ladner Gervais.

“There’s a lot of extend, amend and pretend with respect to finance documentation,” he said. “But at some point the music will stop.”

“Even if they kick the can down the road, it’s still going to be an overarching issue,” he said.

Despite all of this, Mound, expect Kenney et al. to keep their heads firmly buried in the tar sands.


I don't think Kenney is capable of change, Lorne. He has sold his soul to the company store.


Change is upon us, Rumley. How much of that will be positive and how much negative remains to be seen.

Kenny thinks he is going to save Alberta by transporting oil down the Pacific coast, through the Panama Canal to N.B. For refining. The comment that Kenny does not know how to change is correct, he does not. Anyong