It Still Smells to Me 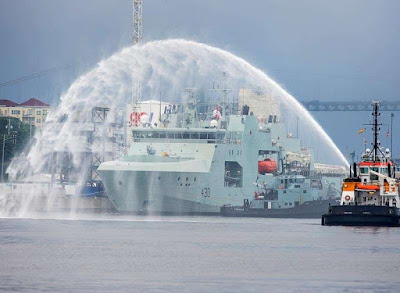 The Royal Canadian Navy gave a gala welcome to its first Arctic patrol vessel, HMCS Harry DeWolf that, despite the claims of the federal government and the builder, Irving Shipyards, may be one of the worst deals in Canadian military procurement.

Canada's patrol vessels are modified versions of the the Norwegian Svalbard-class Arctic patrol vessels. The Norwegians build and sell those for $80 million apiece. Irving shipyards is promising to deliver six modified Svalbards for $4.1 billion.  That's roughly $667 million per ship.

Now, maybe I'm not great at maths but when I multiply $80 million times six, I come in at just shy of half of one billion dollars.  Let's say, for the sake of argument, that Canada's Svalbard clone is, in every respect, bigger and better, hence more costly. That would still be shy of one billion. One billion, not four billion. WTF?


Is this deal sketchy? The DeWolf is a design patterned on the Svalbard.  The Norwegians sold the designs to Canada for some $5 million. The Norse built the Svalbard, design costs included, for under $100 million. Ottawa, however, then paid Irving $288 million to rejig the design and a multi-billion dollar pork pie to actually build the damned things.

The good news for the Trudeau government is that it was the Harper government that hatched this boondoggle back when  the Maritimes' own Peter MacKay was defence minister.


Defence Minister Peter MacKay has suggested that Canada is prepared to pay a "premium" for its new ships in order to rebuild and support its domestic shipbuilding industry.

Irving raced to defend the cost discrepancy between the Canadian patrol vessels and the ship on which ours is modeled. Irving vice-chairman, Ross Langley, said judging the two boats is like comparing apples and oranges.


In comparison with another 2007 program in Denmark where two fully built patrol ships were acquired for a total cost of $105 million (including the design), Langley pointed out that the ships are not the same: the one Irving is building is longer, wider, heavier and holds more crew members.

As naval vessels go, the Canadian Arctic patrol vessel is seriously outgunned by Norway's Svalbard and by its only conceivable polar adversary, Russia's Type 23550.


Russia has produced its own clone of the Svalbard, the Type 23550.

Mounted on the bow, the [76 mm.] artillery gun will provide defence against sea, air and shore-based targets at a distance of up to 15.7km. It has a rate of fire between 120 and 131 rounds a minute.

The armament also includes four Kalibr-NK anti-ship / anti-submarine / land-attack subsonic cruise missiles, which will be launched from two quadruple canister missile launch systems located at the stern of the ship.

Forbes welcomed the DeWolf with a mocking piece, "Nice New Patrol Ship You've Got There Canada - It'd Be a Shame If Somebody Sank It."
Posted by The Mound of Sound at 1:51 PM

Anything involving Irving is going to smell worse than one of their pulp and paper mills. Apparently, making that family richer is the key to getting elected in Atlantic Canada, although that didn't work out as planned for Big Steve.

We even paid Irving to renovate its shipyards. That, for them, is another multi-million dollar, Canadian taxpayer funded freebie.

What, you think the populace of Nova Scotia is overawed by Irving? Quite the opposite, I'd say. Now in New Brunswick, the only modern feudal vassal state, where even the premier is an ex-Irving office boy and everyone's scared to death of their influence if you step out of line, that's different, and the federal vote is all they have left to express their deeper views. If you look up which fake academic "institutes" of neoliberal conservative-thought oligarchic-run nonsense-economic theories, the good ole Irvings put in a few shekels along with what's left of Koch Bros to prop up the BS. The MacDonald Laurier Institute and Atlantic Institute for Market Studies now joined up with Fraser Institute feature, among others. These are your betters who know how to run the world into the ground while pilfering your pocket.

The price gap shown for these ships is pure gouging of course, and makes the TM pipeline purchase look like a minor bargain. I was unaware of this nonsense, so thanks for pointing it out.

Irving has recently shipped a Panamax tanker full of dilbit from Vancouver to Saint John this past month, because they're cheesed off Energy East pipeline wasn't built. No word on whether a decoker unit has been installed to process the goo at Canada's biggest refinery, but then everything that goes on there is a secret. Even after $200,000 fines for giant explosions that scared the herring gulls, nobody knows what blew up. Not for mere serfs to know, I guess. Maybe Irving will join in digging up tarsands now those damn greenie Euros are fleeing the scene in alarm. Likely not, Koch Bros pulled out and Irving is risk averse. They don't "explore", just buy crude and process it, while exporting a lot of the refined product to New England.

Hey, BM. I updated this post to include a look at Russia's new Arctic patrol vessel, the 23550. It's bristling with weaponry including 8 cruise missile launch tubes that include an anti-shipping capability. That, and a high-speed 76 mm. deck gun would put our vessels on the bottom before they could return fire.

Un-hue....N.B. the fuadel province of Canada. Peter MacKay's. Family is not lily white either.

What is a "fuadel" province? Feudal, perhaps? And who ever suggested that Peter MacKay, son of Elmer, in turn partner with Karlheinz Schreiber of the Airbus scandal fame who delivered envelopes of cash across coffee shop tables to the waiting hands of Brian Mulroney who kept it out of his income tax returns until he was outed, was lily white?