Where Did the Republican Party Go So Wrong? An Insider Casts the Bones and Reads the GOP Entrails. 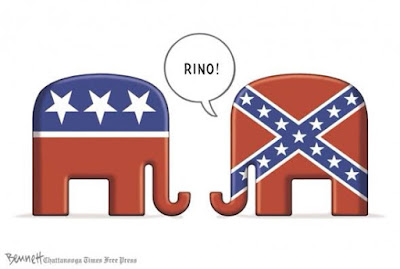 There is an entire wing of the Republican Party today that blames the corruption of the GOP on Donald Trump as though the party wasn't rotting out from the inside long ago.  A veteran Republican political consultant, Stuart Stevens, writes a lot of these "old school" Republicans are wallowing in self-delusion.


I spent decades working to elect Republicans, including Mr. Romney and four other presidential candidates, and I am here to bear reluctant witness that Mr. Trump didn’t hijack the Republican Party. He is the logical conclusion of what the party became over the past 50 or so years, a natural product of the seeds of race-baiting, self-deception and anger that now dominate it. Hold Donald Trump up to a mirror and that bulging, scowling orange face is today’s Republican Party.

I saw the warning signs but ignored them and chose to believe what I wanted to believe: The party wasn’t just a white grievance party; there was still a big tent; the others guys were worse. Many of us in the party saw this dark side and told ourselves it was a recessive gene. We were wrong. It turned out to be the dominant gene.

Racism is the original sin of the modern Republican Party. While many Republicans today like to mourn the absence of an intellectual voice like William Buckley, it is often overlooked that Mr. Buckley began his career as a racist defending segregation.

In the Richard Nixon White House, Pat Buchanan and Kevin Phillips wrote a re-election campaign memo headed “Dividing the Democrats” in which they outlined what would come to be known as the Southern Strategy. It assumes there is little Republicans can do to attract Black Americans and details a two-pronged strategy: Utilize Black support of Democrats to alienate white voters while trying to decrease that support by sowing dissension within the Democratic Party.

How do you abandon deeply held beliefs about character, personal responsibility, foreign policy and the national debt in a matter of months? You don’t. The obvious answer is those beliefs weren’t deeply held. What others and I thought were bedrock values turned out to be mere marketing slogans easily replaced. I feel like the guy working for Bernie Madoff who thought they were actually beating the market.

Mr. Trump has served a useful purpose by exposing the deep flaws of a major American political party. Like a heavy truck driven over a bridge on the edge of failure, he has made it impossible to ignore the long-developing fault lines of the Republican Party. A party rooted in decency and values does not embrace the anger that Mr. Trump peddles as patriotism.

This collapse of a major political party as a moral governing force is unlike anything we have seen in modern American politics. The closest parallel is the demise of the Communist Party in the Soviet Union, when the dissonance between what the party said it stood for and what citizens actually experienced was so great that it was unsustainable.

This election should signal a day of reckoning for the party and all who claim it as a political identity. Will it? I’ve given up hope that there are any lines of decency or normalcy that once crossed would move Republican leaders to act as if they took their oath of office more seriously than their allegiance to party. Only fear will motivate the party to change — the cold fear only defeat can bring.

That defeat is looming. Will it bring desperately needed change to the Republican Party? I’d like to say I’m hopeful. But that would be a lie and there have been too many lies for too long.

Despite all their talk about law and order, the GOP is rapidly ending the rule of law. All in the name of racism.

Yesterday, government lawyers informed a judge that the executive branch will continue to defy a federal court order compelling the full restoration of DACA. Trump has decided to flout a Supreme Court decision, effectively rejecting the judiciary's right to determinine what the law says.

No word yet on whether the judge will attempt to have members of the administration arrested for contempt of court. It's no exaggeration to say that the GOP is rotten to the core and is taking the country down with it.

Trump does consider his executive power to rise above the reach of the courts. For reasons I can't understand few seem willing to challenge his affrontery. When House committees subpoena Trump aides they are often ignored. House Democrats then appear insincere, cowed. I don't get it.

The US has always had the best government money can buy.
By discussing the vices and virtues of either party just prolongs the agony of the corruption of democracy the US represents.