"Festung Trump" Gets a New Wall 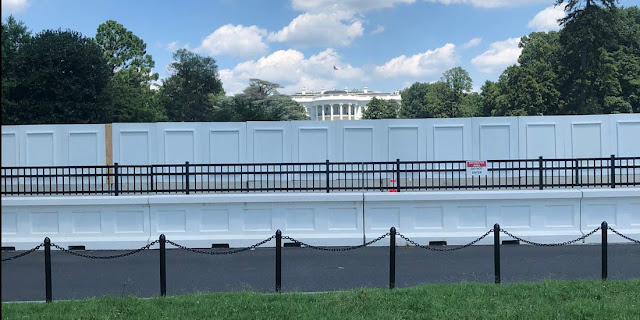 What must Donald Trump see in his future that, with the elections just 100 days off, he's chosen to fortify Festung Trump with a brand new wall? What's next, a 'gator-filled moat?  Mortar pits, machine gun emplacements?


The days of leaning on the black barred fencing for a photo of the White House in the background are ending, with a massive "anti-climb" wall being built around the South Lawn.

Plans for a new perimeter with an "anti-climb" component have been in the works since July 2016, according to the White House history website.


Meanwhile, a new report from the US Center for Strategic and International Studies finds that radical rightwing movements eclipse even jihadist groups as the biggest source of terrorism in both the United States and Europe.


"We see an increasing percentage of plots and attacks in the United States shifting over the past couple of years from jihadist motivations, increasingly, to far-right activity," said Seth Jones, who directs the Transnational Threats Project at the Center for Strategic and International Studies, a Washington, D.C., think tank.

Jones defined right-wing extremists as "sub-national or non-state entities" with goals that could include ethnic or racial supremacy. They can also be marked by anger against specific policies like abortion rights and government authority, as well as hatred toward women, or they may be members of the "involuntary celibate," or "incel," movement.

A report he co-authored recorded 14 terrorist incidents, including attacks and disrupted plots, from Jan. 1 to May 8. Thirteen of them were classified as right-wing, and the other was recorded as being religiously motivated in the context of jihadism.

The report found that the comparable figure for right-wing attacks and plots in 2019 was a little more than 60 percent, which itself was the highest level of such activity since 1995, the year of the Oklahoma City bombing of a federal building, which killed 168 people. And in both 2018 and 2019, right-wing attackers caused more than 90 percent of the terrorism-related deaths in the United States.

He said that, in the almost two decades since the Sept. 11, 2001, terrorist attacks on New York and Washington, D.C., more Americans — 335, according to data compiled by the Center for Strategic and International Studies — have been killed by adherents of a form of right-wing extremism than any other terrorist ideology.

Trump, meanwhile, vilifies what he calls "leftist" protesters as the major threat facing America. I suppose that's because Trump knows the radical right consider him kith and kin. If anything they find inspiration in Trump to fuel their hatred and violence.

Good to see the wall go up. It's yet another sign that Trump's planning a peaceful and orderly transition of power. When do they deliver the RPGs and gattling guns?

I'm pretty sure the armory adjacent to Trump's underground bunker is well stocked with all of those things and more, Cap.

It's certainly a sign of something, Toby. With this jackass it's hard to rule out too many possibilities.