When You Stand Shoulder to Shoulder with America's Army

You stand shoulder to shoulder with the military of the nation that did this and simply left it in its wake. It's Agent Orange and it makes the horror of 9/11 look like kids' play. Vietnam has a population of 84-million. It's estimated that upwards of three and a half million of them have suffered disease or birth defects from the American use of Agent Orange during its Vietnam War.

9/11 ended on 9/11. Vietnam's Agent Orange curse will keep killing and deforming for generations. The chemicals bond to the soil and leach into the water, ensuring that this terror from a past war will linger, perhaps for centuries.

America, naturally, disputes the Vietnamese estimates of Agent Orange victims and - wait for it - says more research is necessary to establish a link between the defoliant and the birth defects. Now we're nearing almost four decades since this stuff was sprayed over the Vietnamese countryside and just how much research has the US done? You guessed it. However if you were a US soldier who got 'exposed' (as opposed to doused with it), you got your compensation cheque a long time ago. 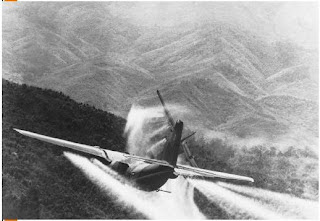 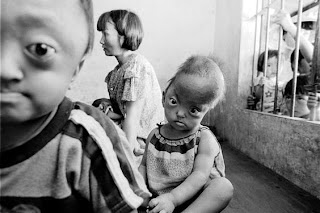 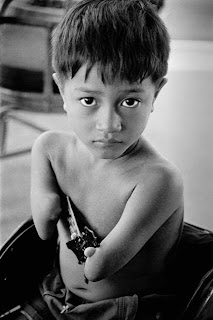 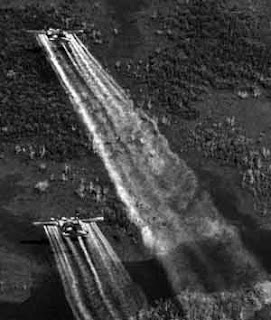 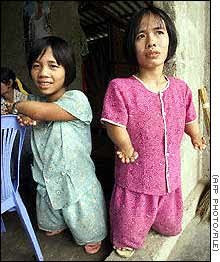 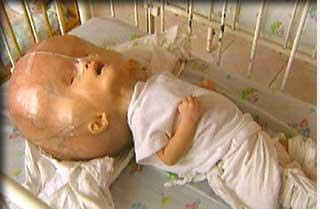 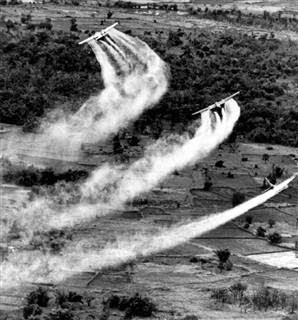 According to the Associated Press, the US Congress recently set aside $3-million to address dioxin contamination in Vietnam.

A lawsuit seeking compensation from Agent Orange manufacturers, filed by the Vietnam Agent Orange Victims Association, is to be heard by a U.S. appeals court on Monday.
Ambassador Marine said in an interview that the U.S. does not plan to provide direct compensation. But he noted that, on top of the US$3 million Congress approved, Washington has spent US$43 million since 1989 helping Vietnamese with disabilities, regardless of their causes.

Fortunately for Iraqis and Afghans caught up in the current war, Agent Orange is no longer being used. They, however, will have to wait and see what effects await them from the depleted uranium shells America likes to use so freely in their countries.
If you're interested in the Agent Orange fiasco, a Canadian firm, Hatfield Consultants have done a lot of work in Vietnam. At their web site http://www.hatfieldgroup.com/ you can find links to numerous books and documentaries on this shameful mess.
Posted by The Mound of Sound at 2:32 PM

Don't you remember the protests against the manufacturing of the chemical in British Columbia at the time?

No, I wasn't in BC at that time. But that's irrelevant. I can accept that the US didn't know how deadly or persistent this defoliant was. What I can't accept is that they turned their back on the innocent victims of their actions. These kids are being born every day and no one is doing anything about it. Read what's been written about it and watch a couple of the documentaries. If it turns your stomach, it should.

I wasn't taking any sort of side from my comment. I know all about the suffering that still continues and "YES" it does turn my stomach. I wasn't attempting to reproach your blog in any way shape or form. I just asked if you knew. Cheers.

Yet another chapter of shame for America.

Hi Anon. Sorry for misreading your comment. I do have your point. This is an infuriating issue I've been aware of for some time. From what I've read, including technical reports, and seen in documentaries, it makes me so angry that one of our own, the US, can live with itself despite this and go on in near total indifference or worse, denial, of it. Since I posted this I expect that new infants have been born in Vietnam with Agent Orange birth defects. The stuff is now in the farm fields and ground water in the countryside. A lot of these victims are too poor to do anything about it. They wind up placing their deformed kids in orphanages because they have no means or knowledge of how to care for them. Theirs is a pretty hardscrabble world in which these sorts of disabilities are inevitably fatal.

When I posted these pictures I took care not to use the very worst examples. The malformed skulls and brains and the stunted limbs are bad enough.

The appeal that comes for hearing Monday will be worth following. From what I've read the argument is whether the defendants are now sheltered by a statute of limitations. If so it could mean that the new little plaintiffs that are being born this month and next and in the years to come are somehow barred by a statute of limitations that expired long before they were even conceived.