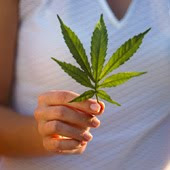 Is legalizing marijuana the elixir of states facing financial disaster?

A report from Reuters claims that several American states are looking at marijuana as a tax revenue source to replenish empty treasuries.

...California came the closest to taxing tokes last week by putting an initiative on its November ballot. The top marijuana-producing state could raise $1.3 billion annually, according to the California Board of Equalization, which collects taxes.

...Similar voter initiative efforts are underway in Washington and Oregon for 2010, and Nevada for 2012. New Hampshire, Massachusetts and Rhode Island are all considering legislation to legalize and regulate the drug, and states as conservative as Virginia and South Dakota are debating decriminalization.

Backers say the debate is gaining steam for a variety of reasons: a softening of attitudes, the spread of legal clinics for medical marijuana use and frustration with the drug war. Supporters say reducing the amount of money spent on marijuana law enforcement would help state budgets.

...Each time California or Oregon has stepped closer to making marijuana legal, others have made the same move four to five years later, said Allen St. Pierre, a spokesman for the National Organization for the Reform of Marijuana Laws.

Other states could follow California's lead, as more than a dozen did after it approved medical marijuana in 1996.

Steve, are you listening?
Posted by The Mound of Sound at 8:37 AM