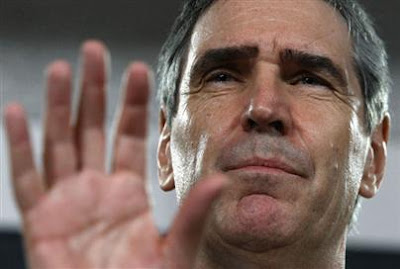 "To this observer, it seems that Liberals today don't stand for much in the way of principles. I have the impression that they will endorse anything and everything which might return them to power and nothing which won't, whatever the merits of either. It's all about getting to power, and it shows."

Fowler said what an awful lot of us have been thinking and saying for more than a year now. He only pointed out the obvious when he warned the Liberal Party is in danger of "losing its soul" in the direction it's been taking.

Will Ignatieff and all his IgLibs listen? Without restoring progressivism to the party, the new LPC will never be anything more than "conservative lite."
Posted by The Mound of Sound at 12:33 PM

The answer is "no" - when has Iggy and the Iggiots shown any balls? They have only pandered and driven a wedge between Liberal supporters...

A good starting point would be the Tar Sands. Will he continue to support their expansion, or call for a moratorium on development pending "tough" new environmental regulations as he calls them? Will he continue to promise to strengthen Canada's position in the world with clean energy innovation while ignoring the ongoing pollution of air and water in northern Alberta?

CWTF, there's no doubt that Ignatieff has been divisive to the LPC. His approaches have probably been just fine for Bay Street but have fallen flat on Main Street, small town Canada.

LMA, I wouldn't hold my breath waiting for Iggy to reverse himself on the Tar Sands. "Clean energy" is a sop to environmentalism, a dodge promising grand future redemption while delivering nothing.

I'm just working through James Hansen's new book "Storms of My Grandchildren." Hansen says pols who talk about carbon caps or cap and trade solutions are deceiving their people. He says that we're at the point where we simply have to reconcile ourselves to the reality that remaining fossil fuels will simply have to be left underground, particularly coal.

Iggy's environmental approach is 20-years behind the science and padded with nonsense and platitudes.

You should read the Toronto Star article about the nonsense Ignatieff was spouting after the conference about decentralizing Canada's national decision-making mechanisms. He wants a conclave of "deciders" (a George W. Bush term) to shape policy. What ever happened to responsible, elected democracy? His inane babbling suggests he would sever government from the populace and allow the country to be steered by technocrats. That's more than just elitist.

If that's Ignatieff's idea of vision he has to go.

That was going to be my post today. You beat me to it. Ambassadors speaks the truth. He is a man of great insight which Iggy never heard of.

Yesterday in the Globe and Mail Brian Topp described Ignatieff's vision of the new style of government as follows:

'Prime Minister Ignatieff will convene arbitrarily appointed academic seminars made up of unelected and unaccountable "deciders" who will assemble, deliberate and set new courses for us all - in our best interests whether we like it or not. And then the deciders will disperse across the land to magically make it all happen by themselves'.

So what ever happened to leadership? What on earth would happen in a national crisis? I have to agree with you MoS, this "vision", or really the lack of any vision or master plan at all on Ignatieff's part, could threaten our democracy. We elect our MP's to represent our views and we need a leader who can decide on the best course of action, not a network of "advisors".

Absolutely LMA. We need leaders to get the best advice possible but Parliament represents the people and cannot be circumvented.

The "deciders" (how I loathe that word) are those we've empowered to represent us and certainly not a gaggle of appointed (or 'annointed') oligarchs.

Unfortunately, the more I hear from Ignatieff, the less confidence I have in the man.