A "Must Read" for the Liberal Right 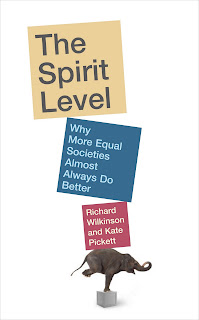 Canadian liberalism seems to have lost its way in the Liberal Party's quiet drift to the right under Michael Ignatieff. The Liberal leader is unquestionably well-educated yet he regularly demonstrates the limited value of intellect alone.

Michael's Gumby-like character that seems capable of stretching in any direction on any issue at any moment should be enough to give all Liberals real cause for concern. It points to a serious character flaw, the sort of failing that allows a person to endorse illegal war of conquest before repudiating it or to condone torture before rejecting it or to pre-absolve Israel for its war crimes in Gaza. A person who vacillates so easily, so repeatedly and to such extremes is mere chaff blowing in the wind. You cannot find vision in beliefs anchored to the briefest moments in time.

I don't think the Liberals have much hope of regaining their former prominence until the party returns to the centre-left. And, until it does, I think Canada will be much the worse for it. We will pay a real price, in the medium and long-term, if we don't even our own keel. One point demanding Liberal intervention is the growing wealth gap between rich and poor in Canada.

To those on the right end of the Liberal spectrum I invite you to read "The Spirit Level" by two prominent British epidemiologists, Richard Wilkinson and Kate Pickett. In Spirit Level, Wilkinson and Pickett bring the scientific approach of epidemiology to bear on the issue of income inequality, the gap between rich and poor, and its effects on modern Western society.

The authors digest half a century of data from the industrialized democracies of Europe, North America and Asia and similar data from each of the United States. The nations and the states are ranked from least to most-inequal and against that are charted their respective performance on everything from mental health, drug use, physical health and life expectancy, obesity, educational performance, teen births, violence, imprisonment and punishment and social mobility. Whether it's a comparison of individual states or of various nations, the results are consistent. Societies with the greatest income inequality always have the poorest performance records. As wealth gap narrows, performance improves. As it widens, conditions worsen.

What's most impressive about Spirit Level is the depth of the research and the manner in which the authors foresee and pre-empt rebuttals about causation, ethnicity and historical influences. They examine and dispose of each of these at length relying not on professional opinion as much as half a century of observation and study.

The lesson of this book is that income inequality results in societal dysfunction. The authors show that this isn't merely a blight on society's poor but also has profoundly negative impacts on all social stratas save for the narrowest at the top. The likewise show that measures to curb income inequality benefit almost all social segments proportionally.

Why I feel it urgent that Liberals open their eyes to the realities of Spirit Level is that it reveals we are closely and perhaps inseparably intertwined with the most dysfunctional society in the developed world, the United States of America. Despite Barack Obama's grand promise of change, the U.S. continues to trend very negatively on income equality and the social ills that it spawns.

A dysfunctional society is a weak society. It is a vulnerable society. Weak or failing societies and enormous social upheaval are expected to be the hallmarks of the 21st century. Even the Pentagon and the CIA have warned this is our future whether we acknowledge it or not. Canada needs a strong, healthy and resilient society even if the United States sees the situation differently. Liberals need to embrace these lessons and realize that Canada and Canadian society may pay dearly for acquiescing to the current drift to the right. Getting back to an even keel isn't going to be easy. It's going to take a leader with resolve and vision and principle.
Posted by The Mound of Sound at 9:36 AM

Have you seen this article, by Doug Saunders, which appears today in The Globe? Possibly relevant to the points you raise.

It'll be one heck of a fight to dump Iggy, honestly. You gotta identify the crew behind him, too. It managed to scuttle your party's leadership contest, and have Iggy appointed rather than elected, while his main rival, Rae, stood by doing nothing except probably silently fuming.

If the Liberals want to save themselves, then Iggy and his enabler's have gotta go.

I expect you're right Troy. The party will continue to languish on its current course. The best bet they have is that Harper will finally alienate enough voters that power swings to them, not on their merits, but as some default option. Either way, under today's Harper or that form of Liberal admin, Canadian society will be neglected.

Was Martin not a little to the right ,also

Yes, Martin was a little to the right. He is a capitalist and a rich man. However, he was not as badly addicted to waffles as Iggy is.