Who Sends a White Guy to Do Covert Surveillance in Pakistan?

Okay, take a close look at this photo.   One of the men is unlike the others.   Can you spot him? 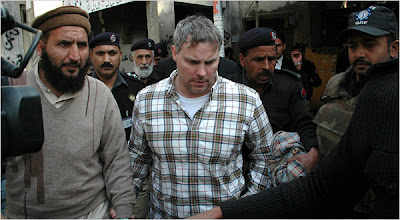 That's right.   The shirt is a dead giveaway.  I mean who wears plaid in Pakistan?

The dude is one Raymond Davis, a CIA "contractor" being held by Pakistan authorities for gunning down two locals with the tried and proven Glock so popular in his homeland.   The Americans now say that Davis was part of a covert team of operatives carrying out reconnaissance missions inside Pakistan for the CIA.

Since his arrest, the CIA director, the chairman of the Joint Chiefs of Staff, and even president Obama have been calling their counterparts in Pakistan to get Davis released.

Davis was supposedly travelling under a US diplomatic passport.  How a contractor gets one of those is kind of curious.  In any case it doesn't seem the Pakistanis are buying the diplo immunity argument.

Memo to the CIA.  Next time you send covert operatives to Pakistan, nix the plaid shirts.
Posted by The Mound of Sound at 10:25 AM

I appreciate your putting contractor in quotes, but I just don't understand how it's come to be that contractor is the word universally used by the media for this form of employment.

As recently as the 1990s, english had a very good, to the point, word that had been used at least since the mid-1500s for "private military contractor"; we called them mercenaries. Then 2001 happened and suddenly the newspapers were calling them "contractors", like these guys had been hired to replace some windows and renovate a kitchen.

You've got a pretty good point. I met one of these supposed contractors a couple of years ago while biking through Washington. Said he was just home on R&R from a job in Afghanistan and went on about how he had survived two IED blasts and his newfound addiction to Tim Horton's at the base in Kandahar. Contractor indeed.

I met some genuine mercenaries in England in the early 70s. They were hanging out in a pub spending the cash they had made fighting for the losing side in Biafra. Big, ugly but incredibly friendly guys.