Just a few days ago, Australian PM. Julia Gillard declared the Vietnam War now a "page in history" and noted that the chief actors, US presidents Kennedy and Nixon, Aussie prime minister Menzies and brilliant Vietnamese general Giap were all long dead.

Oopsie.  Sure Kennedy, Johnson, Nixon and, yes, if we must Aussie Menzies are united in the eternal dirt nap but Vo Nguyen Giap, the guy who defeated the French at Dien Bien Phu and directed the war that led to the conquest of South Vietnam and the unification of the Vietnamese state, well he's still around and turned 100 today. 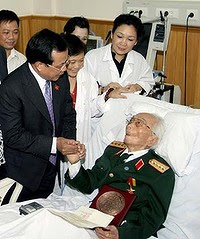 There's a picture of the old bugger in full dress uniform receiving birthday greetings.  Who knew?  Apparently not Aussie PM Gillard.
Posted by The Mound of Sound at 9:43 AM

Email ThisBlogThis!Share to TwitterShare to FacebookShare to Pinterest
Labels: giap

I dunno, he looks dead to me.